Zahha (ザッハ, Zahha) is a young magical swordsman from a distant time and place.[1] The main antagonist of Dragon Ball Legends, he initially poses as an ally to Shallot as well as the Mastermind before revealing his true agenda.

Zahha is a tall blue wizard with pointed ears, green eyes and long white hair. He wears an orange jacket with shoulder pads and a blue mark on each side of the jacket, a black sash around his waist, two long black gloves, a silver helmet with a crest on top, a pair of blue pants and two large black boots.

Zahha is calm and collected.[1] He seems to be very honorable and respectful towards other people individually, as he didn't want to intervene in Shallot's fight, but in the end he joined the battle against the Saibamen just to save Gohan. He can be derisive at times, as shown when he mocked Shallot’s inability to save Bulma on his own. He is also shown to be treacherous and unpredictable, as he struck Shallot with his Energy Blade when the latter was exhausted after his battle with Giblet.

During the special Event staring Young Nappa, Zahha decides to spare him after defeating him with Piccolo due to being reminded of the Nappa who trained him (alongside Shallot) and even convinces him to focus on training young Saiyans.

As noted by Dabura, Zahha might come from the Demon Realm. However Zahha claims to Shallot that his world of origin no longer exists though this is while he is working as a double agent.

During the cryptic tale later revealed to be narrated by Zahha himself, it is suggested that his world (and/or Universe) was brought to ruin and the gods did nothing to stop it as it was apparently ordered by "the king" and other comments he makes during said tale indicating that he may originate from a world and/or one of the original universes erased by the Omni-King Zeno in the past. It is also implied that he felt betrayed by the gods who he holds responsible for his world's destruction and that he seeks revenge on them for their complicity.

Zahha is the mastermind of the Tournament of Time, having kidnapped Shin to stop Beerus from getting involved and having recruited Giblet, Majin Buu, Demon Prince Vegeta, Android 13 and Zamasu to assist him, as well as having manipulated Babidi to use as a puppet leader. His goal being to collect energy from strong warriors, enhancing warriors with dark ki to sort the strong from the weak. Zahha also fueled Giblet with hatred towards his brother and erased Shallot's memory at the time.

Zahha acts as a competitor in the Tournament of Time, where he aids Shallot though refuses to join Team Beerus as he feigns not trusting Beerus. After leaving Shallot, he joins the Earth's Resistance faction created by Future Mai after she ended up in the main timeline due to the tournament. Recruiting Cabba and Piccolo (who had already encountered the Androids and Perfect Cell) the Earth's Resistance discovers the threat posed by New Cell and decide to seek out any incarnations of Android 17 and Android 18 (planning to either eliminate them if they are the ones that Future Mai is familiar with or protect them if they encounter incarnations from the main timeline). Zahha eventually reunites with Shallot who joins forces with them in finding the Androids. Shallot and Cabba are ultimately put in charge of protecting 17 & 18 after convincing them to cooperate.

While searching with Piccolo, Zahha briefly encounters Young Nappa (DBS: Broly, Post-Saiyan Genocide) who ironically was hunting 17 & 18 as they had hit him with their car while traveling with Cabba and Shallot to one of Dr. Gero's Labs to find their comrade Android 16 who Dr. Gero had captured and reprogrammed. Zahha and Piccolo defeat Young Nappa but Zahha decides to spare him due to bring reminded of his old master (the older Nappa) wishing him to teach the young Saiyans with Young Nappa running off to continue his chase (their encounter with Young Nappa all occurs in a special Event that occurs around the same time as the portion of main Story Mode where Shallot, Cabba, 17, & 18 are trying to find Android 16, though only Cabba and the two Androids confront Young Nappa due to Shallot being asleep).

Ultimately Android 17 is absorbed and Dabura assists Semi-Perfect New Cell by killing Piccolo and turning Android 18 to stone, though Zahha is able to counter Dabura's Stone Spit with his magic preventing Shallot from being turned to stone and later manages to free Android 18 but New Cell manages to absorb her.

After Dabura convinces the New Prefect Cell to hold the Super Cell Games, Zahha introduces Cabba and Shallot to Teen Gohan who Future Mai also managed to recruit due to his experience dealing with the original Cell. Due to the Super Cell Games being a team battle royale, Zahha plans to have Gohan fight New Cell while he, Shallot, and Cabba take care of the other participates and New Cell's teammates. They also receive assistance from Bardock who Shallot had met previously. Zahha is badly injured during the battles with Cell's Multi-Form clones and is forced to ask Mr. Satan (pre-Cell Games) to carry him to where Gohan, Shallot (who had achieved Super Saiyan 2), Cabba (who had finally becomes a Super Saiyan at the same time Shallot achieved Super Saiyan 2), and Bardock where fighting New Cell. This allows Zahha to use his healing power on Shallot restoring his strength, allowing him and Gohan to kill New Cell. Zahha even gives Mr. Satan some credit for New Cell's defeat due to his assistance. Zahha, Cabba, Gohan, and Future Mai then part ways with Team Beerus, though Zahha, Cabba, and Gohan have a brief spare with Shallot before they go.

He eventually encounters Giblet and battles him, seemingly resulting in his death.

When Demon Prince Vegeta and Super Buu begin to go against his plan, he banishes Super Buu and disregards Vegeta from his plans.

However, Zahha later reappears, revealing himself to have survived. He appears with Nappa, Yamcha, Tien, Krilin, Gohan (Kid), Gohan (Adult), The Kamikaze Fireballs, Fasha, and Tora to stall Super Buu (Gohan Absorbed)'s forces while Shallot prepares the Super Saiyan God Ritual. While they do manage to hold up Super Buu's underlings, Zahha and Nappa are quickly defeated by the Majin.

At some point, when the battle between Super Saiyan God Shallot and Dark Ki Super Saiyan God Giblet finally comes to an end. Unfortunately Zamasu and the Mastermind arrive and prepare to eliminate Shallot with Goku and Ultimate Gohan (who had been freed from Super Buu along with Piccolo) appearing to take on Zamasu who calls Goku Black in for assistance. However Zahha arrives startling Bulma and Jaco are momentarily put off by his demeanor, until he convinces them that he's there to help. Shallot prepares to confront Zamasu with backup from Zahha who agrees to watch his back. However when Shallot turns to face the enemy Zahha strikes Shallot while his back is turned piercing him with one of his swords infused with energy, and reveals to Zamasu and Shallot's friends that he is the mastermind.

After revealing that the Mastermind besides Zamasu was simply one of his illusions by creating a second phantom next to himself, Zahha reveals that Shallot and Giblet are the vessels for the two orbs that make up the Omnificence Crystal a failed prototype Super Dragon Ball which Zahha has managed to complete by having Shallot and Giblet fight each other in their respective Super Saiyan God forms. Removing the two orbs from Shallot and Giblet, Zahha combines them into the complete Omnificence Crystal which he believes is superior to the Super Dragon Balls. While Bulma and Jaco attempt to gather up Giblet and their defeated allies, they notice Shallot isn't where he fell and realize he went to confront Zahha. Shallot asks Zahha if he truly is the mastermind but can't bring himself to accept his betrayal even suggesting he is being influenced by the Dark Ki like Babidi was though Zahha points out that he cannot sense any Dark Ki coming from him. To prove to Shallot that he is indeed his enemy, Zahha attacks him again this time slashing Shallot with both blades defeating the injured Shallot.

An enraged Super Saiyan Blue Goku attempts to defeat Zahha with a God Kamehameha but Zahha is able to nullify its energy using the Omnificence Crystal. When it seems all hope is lost, Beerus who had been waiting for the true mastermind to finally show himself appears and attacks the traitorous double agent Zahha with Hakai. However surprisingly Zahha survives the attack. Beerus notes he was able to somehow nullify the attack's Energy of Destruction and demands an explanation. Zahha then explains the significance of the orb he is holding which he reveals the history of the Omnificence Crystal and how he managed to complete it using the Tournament of Time, with its competition his true goal for starting the tournament in the first place. It is also revealed that Zahha is the mysterious individual who has been narrating a tale that contains insight into Zahha's origins and why he seeks the Omnificence Crystal to get revenge as has the power to grant any wish as long as he supplies it with enough Kili. This explains how he is able to use it to nullify even Beerus' Hakai.

With the Omnificence Crystal in hand, Zahha decides to get rid of his former allies by using the Omnificence Crystal to perform Hakai. Though Goku, Gohan, Beerus, Giblet, and Team Beerus' defeated allies are all seemingly caught up in the attack along with what remains of the Ice Continent, Bulma and Jaco are able to escape to safety with the unconscious Shallot.

Eventually Shallot comes to and they are approached by Champa and Vados. Vados heals Shallot and the pair reveals that they were asked by Beerus to help the two in an emergency. Shallot briefly fights the pair when he refuses to give up on going back to the Ice Continent despite Champa and Vados' insistence that it is gone. Eventually they decide to let Shallot and company see for themselves, with Vados and Champa taking their leave while noticing Shallot isn't in the best frame of mind to confront Zahha.

As he and his companions make their way to the Ice Continent, they encounter fighters sent after them by Zahha. Eventually they are stopped by Hit who effortlessly defeats Shallot with Time Skip though leaves indicating he is actually an ally though who hired him to protect them remains unanswered. This forces Shallot to rest briefly. Eventually Shallot encounters Frieza and Shisami, with this Frieza revealing that he had heard of Shallot's defeat of his counterpart from Zahha. After Shallot defeats Shisasmi who is killed by Frieza for his failure, Frieza takes on Shallot as Golden Frieza.

Zahha is able to easily take down multiple Saibamen and Raditz with ease way faster than Shallot himself. He is also able to endure Nappa and Vegeta's grueling training.

After joining Future Mai's Resistance group he is shown to be able to take on Android 17 and Android 18. Zahha is also shown to be roughly equal to Dabura when he shows some of his true power. However, Zahha was completely outmatched by Super Buu (Gohan Absorbed). 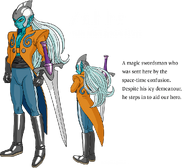