"Chapter 1 (The Case of Being Reincarnated as Yamcha)"

A normal human boy who died in his life and was transferred to the Reincarnation Game, a game created and played by Beerus and Champa, to participate as Yamcha (ヤムチャ, Yamucha).

While becoming Yamcha and essentially maturing the same as the original former bandit, he never gained the latter's scars due to the changes he made in how events played out. Also unlike the original Yamcha, he never cropped his hair into a short spiked-up style.

This boy was an avid fan of Dragon Ball and would participate in Dragon Ball Z: Dokkan Battle tournaments, usually winning when "Oushou" was not participating.

One day when he tried to get a good look at a girl's skirt, he accidentally fell down the stairs in which resulted in the boy's death. The boy's soul was caught and reincarnated into a Reincarnation Game created by Beerus and Champa as Yamcha to participate against "Oushou", the reincarnated being that is known as Chiaotzu.

The boy finds himself reincarnated as Yamcha, immediately realizing he could take advantage of this situation due to his knowledge of Dragon Ball lore. After the battle against Pilaf, Yamcha instead chose to join Goku in training with Master Roshi.

Later, in preparation for the battle against Vegeta and Nappa, after completing training under Kami and Mr. Popo, rather than continuing his training with the others, Yamcha instead asks Mr. Popo for a spaceship to reach Planet Namek. He lands on Planet Namek and immediately seeks out Nail (who turns down his request at first). He then goes off to go find the Grand Elder Guru (who sees that the boy is from another world) to request that he have his potential unlocked. Guru accepts and also has Nail train Yamcha for six months.

While resting inside the spaceship, Bulma calls him and says that the two Saiyans are on their way. The boy suddenly realizes that the time-frame is different in the manga and asks to use the Namekian Dragon Balls. Porunga is summoned and the boy uses the first of three wishes to warp back to Earth. After returning to Earth, Yamcha rushes to the battlefield and defeats all the Saibamen. He then squares off against Nappa and beats him with no trouble at all. Yamcha then teams up with Goku against Vegeta. The boy has a hard time against the Saiyan prince until realizing Vegeta's bingo dance was when Beerus was on Earth. He distracts Vegeta by calling out Beerus' name and knocks him into the air for Goku to fire a charged-up Kamehameha Wave. Vegeta is defeated and escapes. The boy attempts to shoot down the Attack Ball, but stops upon realizing future events would require the reformed Vegeta (i.e. Future Trunks), and decides not to. Since the Saibamen and Saiyans were defeated compared to the original timeline, none of the Z-Fighters die in the battle.

The boy begins to worry about the Earthlings characters being far surpassed in the battles later on in the story against villains such as Frieza, Cell, and Majin Buu. Unknown to everybody else, Kami senses a mysterious presence that is implied to have come from the same world as the boy.

10 years later, the boy heads off to the Cell Games arena where Goku and the others were, but instead takes a different course of action by instead confronting an opponent who is reincarnated in the body of Chiaotzu. Yamcha tells Chiaotzu that he always knew something was up with his actions and behavior and the latter admits that he plans on ruling the Dragon Ball World. Soon, the two reincarnated souls fought against one-another. Chiatozu used his Telekinesis powers to hurl rocks at Yamcha, but the latter counters with his Wolf Fang Fist; just then Chaiotzu uses the Dodon Ray to shoot Yamcha at point-blank range. Yamcha quickly eats a Senzu Bean as Chiatozu moves in for the kill and dodges just in time. Having little choice in regards of not killing an ally nor will the other soul listen to reason, Yamcha uses a capsule to summon a jar to use the Evil Containment Wave in order to seal the latter away; it nearly worked until he becomes too exhausted to seal away Chaiotzu.

Reminiscing the fight between Chaiotzu and Krillin, the boy asks the latter of his birth-date, with him guessing wrong, allowing Yamcha the advantage. The battle ends with the person inhabiting Chiaotzu's body realizing the error of his ways; the two souls peacefully conversed and realized how much they have in common regarding the Dragon Ball world, as well as the idea of spending the rest of their lives in the bodies of Yamcha and Chiaotzu respectively.

The scene then shifts, revealing that Beerus and Champa were playing a game of reincarnation and their game ended in a tie (with Whis and Vados standing besides them). The two Gods of Destruction bickered and destroyed their game; Whis simply returns the two souls back to their original world.

The boy wakes up standing outside of his school with his friend informing him of the stairs incident. The boy waves his hand that summons a gust of wind that lifts up a female student's skirt, and he wonders about the ability. The boy's friend asks how he did that, but dismisses it as some form of coincidence. The final chapter closes while implying that the boy had retained some powers from his time in the Dragon Ball Universe (with the original image of Yamcha besides him).

Unlike in the actual world, Yamcha trains early on with Goku at Master Roshi's as well as training with Korin and drinking the Ultra Divine Water. After completing his training under Kami and Mr. Popo, he traveled to Planet Namek where he got his potential unlocked by Guru and trained with Nail. By the Saiyan invasion, his power level is noted by Vegeta to be over 10,000. His strength proved able to effortless fend off six Saibamen simultaneously and even withstand their combined self-destruction blast unscathed. He also quickly defeated Nappa without issue and finish him with a Kamehameha. Against Vegeta, he was the only member of the Earth protectors besides Goku able to endure the fight. Even more, he proved able to hold his own against Vegeta, he both endured Vegeta's blows and managed to land some of his own alone long enough for Goku to deliver the victory blow. Ultimately, Kami believed Yamcha was truly key in the victory over the Saiyan Prince. Four years later during the Cell Games, Yamcha proved able to unleash the Evil Containment Wave and survive the effort with only noticeable exhaustion.

After defeating Chiaotzu (who was also reincarnated and had just as much knowledge as the boy in regards to the series), Yamcha admits that he will not be able to keep up with the big fights anymore.

He has his potential unlocked by both the Ultra Divine Water and later Guru in the spin-off manga, That Time I Got Reincarnated as Yamcha.

Yamcha (Reincarnated) appears as a playable character in Dragon Ball Heroes. He was added to the game to celebrate the volume release of Dragon Ball: That Time I Got Reincarnated as Yamcha.[6] 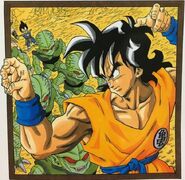 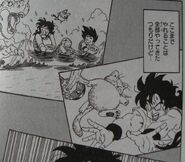 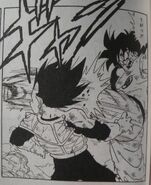 Retrieved from "https://dragonball.fandom.com/wiki/Yamcha_(Reincarnated)?oldid=1918770"
Community content is available under CC-BY-SA unless otherwise noted.