Yamcha's hideout (ヤムチャの隠れ家, Yamcha's hideout) was the home of Yamcha and Puar, located in Diablo Desert. The two lived there back in their days as bandits, but they moved to West City after they prevented Emperor Pilaf from taking over the world, and later returned. The address of the hideout is NB: 8250012B.[1]

The hideout is in a craggy mountain with a hollow interior and the Chinese idiom "千錘百煉" (roughly translates to "tempered a hundred times by a thousand hammers") written on the front side. Since it is in a region thick with rocks, it blends into the scenery and is hard to pick out. Due to this, it became the perfect hideout for the bandit Yamcha. A large hole opens up in the top, and the outside can be surveyed from there. The appearance of the hideout changes a bit in the movie Dragon Ball: Curse of the Blood Rubies.

It is revealed in Dragon Ball: Origins that Yamcha returns to his hideout after the 21st World Martial Arts Tournament to get some of his belongings before going training under Master Roshi. According to Dragon Ball Z: Attack of the Saiyans, Yamcha and Puar move back to the hideout after King Piccolo's defeat. In this video game, Monster Carrot takes over Yamcha's hideout while he was training out. After Yamcha defeats him, he forces Monster Carrot to do chores like cleaning the hideout. Yamcha then left again when he learned that he would receive training from Kami (in the anime he receives the news when in a baseball riot) and does not move back until sometime after Goku defeats Kid Buu (as revealed in Dragon Ball GT).

Yamcha's Hideout appears as a location in Attack of the Saiyans. During his post King Piccolo Saga training for the 23rd World Martial Arts Tournament, Yamcha returns to his hideout for training, only to find it had been taken over by the Rabbit Mob which had managed to return to Earth with Monster Carrot. Yamcha defeats Monster Carrot and forces Monster Carrot to temporarily be his servent.

In Kakarot, Yamcha's hideout appears in Diablo Desert region of the South Mountains Area of Earth where Mount Paozu and Orange City/Satan City are located. It acts as a landmark for the Diablo Desert region and is one of three locations in the South Mountains Area that can be accessed from the World Map, the others being Goku's House and Orange City (renamed to Satan City by the time of the Majin Buu Saga). Occasionally, Puar and/or Yamcha can be found at the hideout. During the Cell Saga Intermission after Gohan gives Dende the Rainbow Crystal he needs to power up the Earth Dragon Balls to make them closer in strength to the Namekian Dragon Balls, Gohan can speak to Dende to trigger the Gods Sub Story: "Hyperbolic Time Chamber Renovations", where Dende plans to increase the number of people who can enter the time chamber (thus explaining how more than two individuals could enter the Time Chamber during the game's Majin Buu Saga). However he requires several materials, one of which is Phantom Sand the sand used in the Hyperbolic Time Chamber's hourglasses which Dende notes can be found near Yamcha's place in Diablo Desert. Gohan finds the Phantom Sand in the portion of the desert southeast of Yamcha's Hideout. Unfortunately collecting it disturbs some buried Rogue Robots who attack Gohan (and any allies in his party) forcing him to defeat them before he can take the sand, Green Crystals, & Red Crystals back to Dende so Mr. Popo can finish the renovations. During the -Trunks- The Warrior of Hope DLC, it is revealed that unlike its former owner Future Yamcha's Hideout survived the Android conflict presumably due to its location in Diablo Desert. However as Future Puar lives with Future Master Roshi, Future Oolong, and Future Turtle, the hideout is left abandoned, though Future Trunks can visit it whenever he's in the South Mountains Area.

Yamcha's Hideout in Curse of the Blood Rubies

Monster Carrot in Yamcha's hideout in Attack of the Saiyans

Yamcha's hideout in Attack of the Saiyans 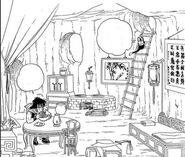 Yamcha's hideout in the manga