Manga: "The Weirdo with the Ball"
Anime: "Mark of the Demon"

Yajirobe's katana is a powerful sword that is always seen on Yajirobe's person.

Yajirobe's katana is very sharp. It sliced through not only Vegeta's tail, but Vegeta's Battle Armor as well, which only the strongest energy blasts could pierce through. It is also capable to slicing right through a solid building with little effort. Yajirobe uses the sword at least four times in the anime and manga. The number of yellow diamonds on the sword handle is inconsistent from shot to shot in the anime.

Yajirobe first uses his katana on Cymbal, slicing him in half. He next uses it while fighting the Darkness Ice Monster on his way to get the Ultra Divine Water for Goku in an anime filler.

Yajirobe uses his katana to cut off Great Ape Vegeta's tail, forcing the Saiyan back into his normal form. Shortly afterwards, Yajirobe used his katana to slice through Vegeta's Battle Armor after Goku had been defeated, to stop Vegeta pulling off Gohan's tail. The sword was later used by Krillin in an attempt to finish Vegeta off, but was stopped by Goku before he could.

When Future Yajirobe is shown to be killed by Future Android 18 in Future Trunks' timeline, his sword is broken.

In Dragon Ball: The Return of Son Goku and Friends!, Yajirobe's sword is seen slicing through rubble from a building.

In the anime "Future" Trunks Saga, Future Yajirobe is revealed to have survived thanks to Future Korin giving him the last Senzu Bean and continues to wield his sword (which was either repaired or was never broken) until he is killed by Infinite Zamasu.

Yajirobe's sword is the Z-Fighter Exhibit #12 in Dragon Ball Z: Buu's Fury, and trophy No. 36 in Dragon Ball: Advanced Adventure.

Yajirobe uses his katana to fight in the Budokai Tenkaichi series and other video games where he appears as a support-type character.

In Dragon Ball Z: Battle of Z, Yajirobe's sword is an item that increases melee attack power for one minute.

In Dragon Ball Xenoverse 2, Yajirobe's Katana appears as a wearable accessory which can be purchased by the Future Warrior from the Accessory Shop in Conton City for 2000 Zeni (or 1 TP Medal).[2]

Yajirobe attacking Cymbal with his sword 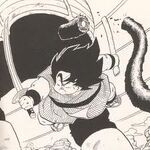 Yajirobe cutting Vegeta's tail off with his katana in the manga