Xeno Syn Shenron shares the same design as his main timeline counterpart with a different palette. Instead of being largely white, he is now an ash grey. Whereas before he had the seven Dragon Ball's placed in his chest, he now has the seven Dark Dragon Balls placed in his chest instead. He also sports several yellow lines across parts of his body.

Xeno Syn Shenron's personality is identical to his main counterpart's.

Like in the main timeline, Syn Shenron was brought forth by the Cracked Dragon Balls in Age 790 and eventually became Omega Shenron to battle Gogeta. However time changed when the Dark Empire interfered, leading to Omega Shenron being annihilated by Fin after he absorbed Gogeta.

Main article: Dark Empire Saga Xeno Syn Shenron's Dark Dragon Ball merged with Xeno Frieza, but was removed from him after his defeat.

Main article: Dark King Mechikabura Saga In the game, Demigra orders Xeno Syn Shenron to fight Xeno Goku, Xeno Vegeta, Xeno Gohan, Xeno Trunks and Xeno Goten after the group confronts Demigra inside Shirogame. He absorbs the Dark Dragon Balls of the defeated Xeno Shadow Dragons, though Robelu notes that he is still losing to the Time Patrol. Demigra gives him some of his power, and Xeno Syn Shenron gains his Transcended form. Gohan and Trunks fuse into Super Saiyan 3 Xeno Gohanks and defeat Xeno Syn Shenron, destroying the Dark Dragon Balls in the process.

Xeno Omega Shenron is able to hold his own against Xeno Goku, Xeno Vegeta, Xeno Gohan, Xeno Trunks and Xeno Goten - though Robelu notes that he is losing. Gaining Demigra's power, Xeno Syn Shenron achieves the Transcended Demon God form, however he is defeated by Super Saiyan 3 Xeno Gohanks.

Like his counterpart, Xeno One-Star Dragon achieves a super form by absorbing his respective set of Dragon Balls into himself.

By being gifted Demon God Demigra's power, Xeno Omega Shenron achieves his own version of the Transcended Demon God form. 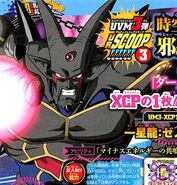 Retrieved from "https://dragonball.fandom.com/wiki/Xeno_Syn_Shenron?oldid=1906931"
Community content is available under CC-BY-SA unless otherwise noted.