Weighted clothing are clothing fitted with built-in weights to make them heavier than ordinary clothes.

Weighted clothes are used by several warriors throughout the series. Goku uses weights such as a black undershirt and later a dark blue undershirt and dark blue boots at the end of Dragon Ball in the 23rd World Martial Arts Tournament and during the battle with Raditz. The weaker Z Fighters use weights to train for the arrival of the Saiyans at The Lookout. Finally, Pikkon demonstrated his use of weights, during the Other World Tournament, against Goku.

The original use of the weighted clothing is revealed in the battle between Goku and Tien Shinhan during the 23rd World Tournament, where Goku explains that Kami had him use them as part of his training at the lookout. Tien holds all of his weighing clothing, estimating them all adding up to at least 250 pounds (113kg) (boots, wristbands and undershirt 50 pounds each).[2] Having shed his burden, Goku then proceeds to "warm up" through a series of whirlwind speed attacks, which provides a pleasant show for the crowd. Despite being the most humorous fight involving weights, it is most certainly not the battle in which the removal of the clothes made a significant difference.

In the battle against Raditz, it was shown that the weighted clothing of Goku and Piccolo made it so that they could only use around 80% of their maximum power. As time goes on, weighted clothes become less significant in battles. Goku stopped wearing weights in his clothes altogether after his training with King Kai in the Other World, due to King Kai removing the weights from Goku's undershirt, boots and wristbands among other modifications to his uniform via Magic Materialization.

The battle which holds the title of "Most obvious difference" is between Piccolo and Frieza's second form. After the assimilation of Nail, he is already fighting evenly with Frieza. Finally, he takes off his weights, becoming strong enough to dominate Frieza in his second form, a feat that no other warrior had done up to this point. This is what pushes Frieza to display his previously unseen 3rd form.

Other occasions were weighted clothing being removed causing a change in the fight include Piccolo's fight with Dr. Gero, where he was easily beaten with the clothes on, but after removing them he completely overwhelmed Gero. Additionally, in Super Namek Piccolo's fight with the Androids, were with weighted clothes he is around the same strength as Android 17, and after removing them is able to fight for a long period against the Android, despite him having limitless stamina. When Pikkon wears his weighted clothing during his battle with Goku, he is somewhat superior to Goku's base form, but after removing it, he is superior to Goku's Super Saiyan form (at the time).

Goku uses weighted training gear (both wrist and ankle weights) while training in the Other World for the 25th World Tournament on Earth. South Kai changes his weights from 2 tons to 10 tons on each leg and foot, totaling 40 tons altogether, and Goku turns Super Saiyan to handle this increased weight.

During Goku and Vegeta's training with Whis, Whis forced them to fight and train while wearing extremely heavy training clothes that made it hard for them to even move.

In the manga, Whis forces Goku and Vegeta to wear this clothing as punishment for transforming into Super Saiyan Blue, violating their sparring match's "transformation restriction".

Vegeta noted the effect of the outfit's weight is greater than the effect produced by the intense gravity produced by Bulma's Gravity Machine, indicating training with the suits is superior to Vegeta's normal gravity training. Whis himself notes that shortly before Champa and Vados' arrival that Goku and Vegeta were both able to move about adequately in the suits despite their weight which is demonstrated by them doing 50,000 push-ups using only a single thumb to support their entire bodies though both were sweating profusely and quickly lost their balance after Vados' sudden arrival caused the planet to shake. Though they could move adequately, they were still encumbered by the heavy clothing to the point Champa did not perceive Goku or Vegeta a threat as he was unaware their sluggish movements were caused by the heavy outfits they were wearing as he and Vados left shortly before Goku and Vegeta removed them, thus the outfits inadvertently concealed Goku and Vegeta's true capabilities from Champa until the Tournament of Destroyers. In the anime, the immense weight of these outfits is humorously shown by them slowly sinking into the ground of Beerus' Planet after they are removed by Goku and Vegeta though how much they actually weigh is never specified in either the anime or the manga.

Weighted Clothing made its first appearance in Dragon Ball Z: Dead Zone in the form of the weighted portions of Piccolo's Demon Clothes. Piccolo is first seen wearing it when he is attacked and beaten by a transformed Garlic Jr. and his henchmen who mistakenly believe they killed him, though fortunately for them they failed or otherwise Kami would have perished before Garlic Jr. could use the Dragon Balls to obtain Immortality (Garlic Jr. was apparently unaware of Kami's death would cause the Dragon Balls to become inert, as this knowledge is apparently only known to the Dragon Team as a result of the events of the Piccolo Jr. Saga).

Piccolo is wearing it when he confronts Sansho whom he defeats without removing his weights. However Piccolo removes them later to fight Garlic Jr.

In Dragon Ball Z: The World's Strongest, Piccolo wears it when rescuing Gohan and Oolong from Dr. Wheelo and Dr. Kochin's Bio-Men before his is captured and brainwashed to serve the two villains.

In Dragon Ball Z: The Tree of Might, Piccolo is wear it when he first confronts Turles though it is mostly destroyed while Piccolo is shielding Gohan from Turles' attack.

In Dragon Ball Z: Lord Slug, Piccolo is wearing when his meditation is interrupted by Gohan's whistling to make Icarus dance revealing Namekian ears are sensitive to whistling. He also wears it when he comes to rescue Gohan from Lord Slug's Demon Clan. He wears it while fighting with Wings who tries to convince Piccolo to join them after recognizing him as a Demon Clansman, though Piccolo uses this as a ride to catch Wings off-guard and kill him. His weighted cape is later destroyed while protecting Gohan from Lord Slug. After Lord Slug's defeat, Piccolo creates new Weighted portions for his Demon Clothes before using Regeneration to regenerate his ears which he had previously torn off so Gohan could weaken Great Namek Lord Slug by whistling.

In Dragon Ball Z: Cooler's Revenge, Piccolo is wearing his Weighted Demon Clothes when he arrives to save Gohan from Cooler's Armored Squadron though removes it to deal with Cooler's henchmen while Gohan delivers the Senzu Beans to the injured Goku.

In Dragon Ball Z: The Return of Cooler, Piccolo wears his Weighted Demon Clothes while traveling on the spaceship to New Namek. He later removes it to fight the Cyclopian Guard.

In Dragon Ball Z: Bojack Unbound, Piccolo is wearing it during the Intergalactic World Tournament though during his match against Krillin, he leaves due the lack of a challenging opponent.

In Dragon Ball Z: Broly - Second Coming, Gohan briefly imagines he is being saved by Piccolo wearing his Weighted Demon Clothes, though it is later revealed to actually be Krillin cosplaying in an unweighted set of Demon Clothes (effectively lampshading the running gag of Piccolo saving Gohan in the earlier films before Second Coming).

In Dragon Ball Z: Fusion Reborn, Pikkon wears his Weighted Clothing after Grand Kai postponed his second Other World Tournament match with Goku. He wears it for the rest of the film even when he confronts Janemba to buy time for Vegeta and Goku to perform the Fusion Dance after their previous attempt ended it failure.

In Dragon Ball Z: Battle of Gods, Piccolo is seen wearing it during Bulma's birthday party and when he briefly fights God of Destruction Beerus (though neither of them was fighting seriously).

In Dragon Ball Z: Resurrection ‘F’, Piccolo wears his Weighted Demon Clothes when confronting the Frieza Force Combatants. Interestingly, Piccolo takes advantage of his weighted cape and turban by removing them and throwing them to one of the Combatants he was fighting causing the soldier to fall when they caught the clothing as they were unaware the clothing was weighted, allowing Piccolo to fight unhindered and removing one of his opponents as well.

In Dragon Ball Super: Broly, Piccolo wears his Weighted Demon Clothes when Vegeta and Goku briefly escape the battle with Super Saiyan Broly (who turns his attention on Frieza due to his berserker mentality) so he can assist Goku in teaching Vegeta the Fusion Dance.

Weighted Clothing is an item that allows the user to gain more experience points after battles in Dragon Ball 3: Gokuden and Dragon Ball Z: Harukanaru Densetsu.

Weighted clothing are incorporated in Dragon Ball Z: Buu's Fury in the form of armbands and boots. In keeping with their use in the manga/anime, wearing them slows down the character, but increases the experience obtained by defeating the enemies. The 1 Ton Boots and 1 Ton Armband can be found early in Other World, while heavier armbands and boots will sometimes be dropped by an enemy. Though the heaviest ones (Kiloton Armbands and Kiloton Boots) can be bought on the planet of the Kais. The heavier the armbands/boots, the higher level the characters have to be at to equip them.

In Dragon Ball Xenoverse 2, in the Frieza's Spaceship time rift anomaly, Burter reveals to the Future Warrior that he put weights on his Battle Armor for training to hone his speed, though he complains about how heavy they are. This suggests that Battle Armor can be modified to incorporate weights thus turning it into Weighted clothing. Additionally South Kai's increasing the weight of Goku's weights during his training in Other World is referenced by South Kai's Super Soul "40 ton weights!" which increases the number of experience points gained after quests or battle when equipped thus this Super Soul can be seen as simulating Weighted training.[1]

As part of the Master Pack DLC, Whis likes to tease the Future Warrior by suggesting he will make them wear a super-heavy outfit, referring to the same weighted clothes he made Goku and Vegeta wear. After they complete his training he jokingly suggests that he will make them do the entire course over while wearing one. However, he is only joking and the weighted outfits worn by Goku and Vegeta in Super cannot be obtained.[4]

In Dragon Ball Legends, certain versions of Piccolo and Pikkon can be played with their Weighted Clothing acting as a base form, while the weighted clothing removed appears as a "transformation" called Agile Style (in their Main Ability Info Details) which represents their respective agile fighting styles they use when their weighted clothing is removed. Additionally, the Piccolo's Demon Clothes that Shallot can obtain as an Custom Outfit, are based on Piccolo's "Agile Style" Demon Clothes. There is also an "agile style" Goku based upon when he removed the training weights during his fight with Raditz, though this version acts as his base form instead of being a transformation. Also certain versions of Piccolo and Pikkon utilize agile style as their base form instead of it acting as a "transformation". 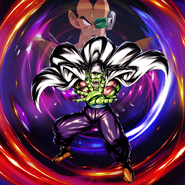