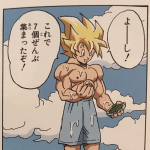 Hi, TheCreepy904, welcome to Dragon Ball Wiki! Thanks for your edit to the Big Bang Kamehameha page.

The part of you keep adding for SS Blue is already up. Read the appearance section at the beginning and you'll see it. DragonEmeperor (talk) 02:35, December 13, 2018 (UTC)

Please stop edit warring. Use the talk page and leave the article until a consenus is reached. Continuing to put your edits back on otherwise will get you blocked for violating the rules.

Also this Wiki uses the english dub for quotes because this wiki is aimed at western readers and the funimation dub is more familar to this demographic then the manga or original Japanese version is because the west got the english dubbed versions of the anime before the manga.  0551E80Y (talk) 12:28, July 28, 2019 (UTC)

Right, so you support the misinformation being spread then just because more people lean towards the Englush dub? What a load of bullocks, it's because of users like you we have so much confusion in this community, it can still be explained by the view of the Japanese version without confusing readers. If you are really against what I'm doing then you people should really consider renaming this wiki to "Funimation Dragon Ball Wiki", because last time I checked, a lot of the stupid misconceptions have come from this wiki particually.

I'm consulting another admin for a second opinion. EDIT: Just because the dub came first, doesn't make it right to have the dub terms used as canon on this site, it's the equivilent to head canon. Since DBS started in 2015, newer fans have been introduced to the original cast as well as the japanese va's. Dub coming first shouldn't even be an arguement. If that's the case, change everything in this wikia to fit the original Z dub because that came first, Ascended Super Saiyan, Frieza's 'native language', arcosian race, etc etc. TheCreepy904 (talk) 13:06, July 29, 2019 (UTC)

You are blowing what I'm saying out of proportion. I said the demographic, meaning the audience is more familar with the english dub, that doesn't mean that this wiki is solely exclusive to whatever the english dubbing companies put out.

But if you want a second opinion go right ahead, stop the edit war and use the talk page or you will be blocked. Your critisicm of this does not excuse you for violating the rule of no edit warring. And you will be blocked for that if you continue to do so.  0551E80Y (talk) 03:30, July 30, 2019 (UTC)

The edit I made on the 8th was only touched on the 22nd, I don't think I started the edit war, doesn't make sense. If anything they were breaking the rules not me, being an admin means treating users fairly, not taking sides without assessing the situation. TheCreepy904 (talk) 11:00, July 30, 2019 (UTC)

He is treating us fairly. If the edit was changed a day or a week without any previous dispute of the edit prior to the edit being changed and was left undisputed after the change for about a week, that is not edit warring. It is only edit warring when someone continues to put back their edit 3 or more times within a given day after given an explanation of the removal of their edit and while their edits are being contested without first reaching consensus and still fighting just because they don’t agree with the previous edit which is what you did. The contesting user is forced to leave the disputed edit in its last accepted revision before the edit war until consensus can be reached by both users. Look at the rules. I was merely contesting your edit while you were edit warring just because you didn’t agree with the edit or the removal of your changes so you violated the wiki. We even had a discussion pertaining to this matter in my talkpage and you still decided to mess with page and continue to edit war before the discussion was over and before a consensus can be reached so I had no choice but to report you for edit warring and had to continue to contest your edit before a consensus can be reached. (Sosuagwu17 (talk) 23:09, July 30, 2019 (UTC))

Exactly, you started the edit war, I don't agree with your edit, you feel entitled to have it stay the way YOU changed it until we come to an agreement, that's not how it works, it was left untouched until you had a problem with it. Leave it as it is until we reach a consensus, Aussieboy isn't treating the situation fairly, he didn't check the history obviously, and just went ahead and threatened to ban me. Leave it as the subbed version until we reach an agreement, it was left as subbed for a week and a bit and then the only person who had a problem with it was you, I've explained why it should be the subbed version, if this is a Dragon Ball Wiki then we should follow the main source. This is one of those instances where the dub and subbed quotes are quite different in how they are structured. TheCreepy904 (talk) 02:15, July 31, 2019 (UTC)

It was left with its dub quote about a week as well so it met the criteria of being a safe edit as Neff stated. So it is only fair to leave it with the dub quote and also since the dub quote has been on the page way more longer compared to your change back to its subbed version and my changing back to its dubbed version. (Sosuagwu17 (talk) 04:35, July 31, 2019 (UTC))

It looks like your going to have to retain the block, it's only for a few days, the SSR conversation will still be open when you get back and hopefully everything will have cooled down by then. I understand that edit conflicts can be frustrating at times but if you retain patience then everything will go smoothly (and absolutely do not swear). --Neffyarious (talk) 16:15, August 1, 2019 (UTC)

Right so what's the issue. I saw the initial problem, I can get where you're coming from. I don't have a particular issue with the quote being changed, I'm not aware of any rule that says it has to be a Dub quote.

So you said you changed the quote and then it was about a couple weeks later that Sosuagwu changed it back to the Dub? Then you went to change it back for the second time and that was what started this edit war?

Well see the problem is on July 28th, 0551E80Y told you to stop edit warring but I can see you still tampering with the page as of July 31st so it's not like you weren't given a chance.

As for what you're saying about the quote confusing people or not being a good representation of the character and so you wanted something more suitable then that's fair enough but if there is any kind of dispute no matter how trivial, it still needs to be talked out and agreed upon first.

Now you aren't a new user because you signed up years ago, but most of your activity has been pretty recent. You've never been blocked before either. So if you can promise me that you won't tamper with the page again until you've come to an agreement on the talk page first, then I will unblock you right now but in exchange if you edit war again after this at any point then I'll block you for three times as long as I normally would.

So what do you want to do? Take your block now and then be treated equally in the future or be unblocked now and get treated harshly in the future?Bullza (talk) 12:37, August 2, 2019 (UTC)

Well, you've pretty much got the whole story almost, but I feel like Aussieboy was taking sides because I was trying to get Sos to talk on the talk page but he refused and kept undoing my edits, I feel like I'm the only one being punished.

To anser your question, what do you mean by treated equally in the future as opposed to harshly? I'm assuming you mean be treated as a normal user would be treated but if I choose to be unblocked now, that's a privilage that if broken, will result in a harsher punishment, am I right? TheCreepy904 (talk) 10:49, August 3, 2019 (UTC)

Here's the problem though, after watching the episodes again Black is using God Ki from the start thanks to being Zamasu's spirit and ki in Goku's body making Goku's body godly. Noted by how Trunks and the rest excluding Goku and Vegeta couldn't sense his actual power but Goku and Vegeta could with Vegeta pointing out multiple times how strong black actually is and that Trunks stands no chance for example. Black does not need a Super Saiyan God form as he is always using God Ki, as a Godly Saiyan. He then goes Super Saiyan(which although it would be just Super Saiyan for him, it is still SSGSS, he just doesn't need the actual SSG form to reach it since he already has God Ki himself) So yes SSGSS and SS are the same thing for Goku Black. But saying that his SS form is NOT a godly form is entirely false. It needs to be noted properly.

It's not still SSGSS, he's not a Super  Saiyan God in base, he's just a god. Going Super Saiyan doesn't result in SSGSS or SSG, it results in "A Goku Black version of Super Saiyan". Goku Black himself if he has God ki in base is a godly entity, his base form is godly, it doesn't need to be said that his rose form isn't godly if he's basically godly anyway. TheCreepy904 (talk) 14:59, January 30, 2020 (UTC)

Retrieved from "https://dragonball.fandom.com/wiki/User_talk:TheCreepy904?oldid=1886725"
Community content is available under CC-BY-SA unless otherwise noted.