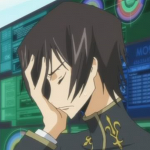 Alright then is this sig alright? >

Getting around to responding to things

I saw your message about me quitting music. Yeah, I'm basically just too unmotivated to be creative and make stuff anymore. Sorry about it haha.

Well, I have nothing much to do.. so I just try to stop  them :P . It's just a time-pass. I do many things that you wont understand.

I actually finished the series about 10 minutes ago. I'm trying to resist the urge to cry right now, and I'm doing an awful job.

Saying "the introduction" is kind of vague; do you have a specific quote you're referring to?

Putting periods outside of quotations seems to be a more British practice, but I recall this disagreement occuring before and the result being that periods were to be put outside the quotation marks for some reason. Perhaps it is the difference between quoting speech versus titles, but I'm not sure.

Perhaps you could bring it up on the Manual of Style talk page? I'm not particularly clear on this rule either. You could even ask Jeangabin666, since he was the one who reverted your edits.

LAWD JESUS HOW MANY NAME CHANGES WERE YA ABLE TO GET FROM STAFF?! xD

Assuming you read my profile and the "What I hate" and "What I like" sections, I used to hate SS7S guts back when I made that, so I typed in "know-it-alls" and linked SS7S there. I decided to remove it sometime later,e but I kept "know-it-alls" there. The difference is a smart person knows it all, but keeps it to himself. A know-it-all doesn't know it all, and blurts out others mistakes. I guess I'm kind of a know-it-all, but eh.

Okay sorry! #: Hmm, that actually makes me laugh, haha. How many loopholes can our country support?! Ah well. So whats up? Done anything productive this summer? :B

I had no idea thats what happened to Rome! I thought they were all poisoned with Pb from their plumbing systems? :S I like your choice of vernacular, by the way. Its very entertaining to read, ha! Studying for what? Are you crazy?! Go and enjoy the sun and frolic in the daisies if you still have the chance! When do you start school again? Where you goin; a little mano-o-mano hunting trip or...? Ive been great! Im on vacation right now, and I really love all of it. Living with my grandma in 700+ year old city is fantastic. I just turned 18 a few days back too so I feel adult-ish.

Haha, its totally understandable! I didnt see your reply either, it was kinda far up! xD I see, I see. Yeh, there is no actual defined reason as to why the Roman Empire collapsed like it did. One thing is certain: All powerful, man made things must come to an end. Wow, Japanese! Thats actually quite interesting! Is there a reason that youre studying it or is it just for fun? Meh, Ive had an essay Ive been procrastinating about for school. I should be doing it now...

Lucky duck! Are you going to Tokyo? One of my friends I met in foreign exchange at my HS lives there. What grade are you getting into? Im a senior this year. Where did you backpack? Believe it or not, Im going to the mountains tomorrow too! :# Staying at my Aunts and cousins place... apparently the place Im going to is even more beautiful during the Christmas season, ugh. My trip has been good so far! Getting a real hang of the language too.

Alright, they might take me a while to see if theyve been added though, you know? Okedoke aahaha. Yesh, something great must always come to an end. Japan is interesting indeed! I should have you know... I have my Word DOC opened and Im planning to get back to the essay after this message!

Wow, those cities by themselves sound interesting. I always thought the Japanese countryside would be beautiful, like riding a bike through there n junk<3 I hope you had fun hiking hehe. I came back from there a few days ago. It was a mountain town called Targu Ochna in Romania. Im back in the bigger cities though. xD We speak Romanian here, derpherp jajaja.

You can sort out my sig

You can sort out my sig. I dunno how to fix it. I'm sure you can help. User:Destroy Us All|What are you so afraid of Cell?

I did what you told me to do

I did what you told me to do. Let's see if this works on your talk page.User:Destroy Us All|What are you so afraid of Cell?

I made the review.

Tell me what you think in the review.

[the audience stays silent]
Bob *silence*
Bob Saget *chuckles to himself, As if on cue, the audience breaks into laughter and some members fall over*

See, now I leave you new secs so I know you read this response :D

Wait... so you already went to Japan for your trip or youre planning on getting there? O.o Now you gots me confused. Hiking, man oh man, as long as I dont camp afterwards, Id love to hike all day. Ive been camping once before in my life and I absolutely hated it. Like, eff nature I dont want to SLEEP in it, a daytrip is good enough for me. Well, its also cause Im allergic to mosquito bites and that would be stupid to risk. Visit the Carpathian mountains in Romania whenever you get the chance! Half of Europes bear and wolf population are up there. And maybe vampires..? JK! Dont joke like that w a Romanian. They get annoyed about the whole Dracula thing. I finished my essay after weeks of procrastination! :D Be proud of me, it took a buttload of effort!

Haha poopface<3 So you wanna go to Hiroshima, dats the place yeh? I hope you make it there one day. A bed in the woods you mean? HELLNAH! MS B NEEDS HER PRECIOUS TOILETRIES AND COMFY BED AND STUFF. NO LEAVES TO WIPE WITH OH LORD. Well. Allergic, like nasty reactions. People get normal small bites. Mine get painful and swollen and ugh. I would bathe in RAID repellant if I had to. Rather that than gettin a million bites, which later turn into mini scars. I dunno, my grandma says I have sweet blood cause Im a sweet girl! :3 It is, really. I understand people get so darn tired about stereotypes. They aint cool. And BON CHANCE POUR TOI, MON AMI!

he said "she has a nice butt."

i hope this explains everything

Like the legend of the Phoenix, all ends with beginnings. What keeps the planets spinning, the force from the beginning. --You kill or you die...Or you die and you kill. 00:58, November 8, 2013 (UTC)

Ay You(: Tell me whats up bro. From your fav gal pal, Bulms.

Oh poppycock I love checking up on all my ol pals(: Hmm, in my last year of school and tryin to keep on keepin on, like doin my hw and stuffs xD Christmas time soon! Yesterday I just finished organizing a small Secret Santa thing w my friends @ lunch haha. What else? Nothing much, just goin through the same old routine and whatnot. I wish I had more time to go out and see movies, I havent done that since summertime. Bleh.

Retrieved from "https://dragonball.fandom.com/wiki/User_talk:ThatCruelAngel?oldid=1324372"
Community content is available under CC-BY-SA unless otherwise noted.