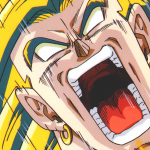 Hi, welcome to Dragon Ball Wiki! Thanks for your edit to the Talk:Cell page.

I took a look and the pic that is on the article Final Impact is not on either page so your wrong get your info correct before you suggest for someone to look at something. Also don't tell me what to do. Here are the reasons for that part you haven't been on here long enough and most importantly your not an admin which means not the boss of me. I only advise or suggest. How would you like it if you had been here as long as I have and I joined when you did and was making the edits you made and everything?  Goku20  Talk  ULTRA DBZ  ULTRA POKEMON  16:52,10/10/2014

Because I don't know why you removed it.

It doesn't need to be similar to be a variation. Though I agree on the spear part. I'll change it.

Thats what it is called, check under Advanced levels under Super Saiyan God page, also Kaio-Ken SSJGSSJ is a level because its a step above Super Saiyan God Blue Form, even Vegeta himself said Goku has surpassed him when he used it- Marethyu01 (talk) 00:51, April 20, 2016 (UTC)

I've heard of Daizenshuu a lot but I don't know what it is could you tell me?

If you are familiar with manga/anime like One Piece and Naruto, then you might have heard about the databooks they come out with.  Well, the Daizenshuu is the Dragon Ball version of it.  It was actually released in several parts after the series ended and one issue gave the breakdown of the Super Saiyan transformations.  Stitchking1 (talk) 17:59, May 27, 2016 (UTC)

Retrieved from "https://dragonball.fandom.com/wiki/User_talk:Stitchking1?oldid=1463653"
Community content is available under CC-BY-SA unless otherwise noted.