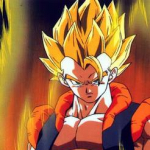 Hi, SSJ3Vegeto, welcome to Dragon Ball Wiki! Thanks for your edit to the Forum:Plot hole?? page.

well, Gohan has a lot of clothes, so maybe he just wanted to wear those that day. Then in the day of the Cell Games, he wore another.

Thanks for the link to the page, sorry lol.

What would you put Broly at, in a rating?

To me he looks about the same in both the Broly movie and the Bojack movie. The not being FP-SSJ is not very important, since it's just a movie. There are other movie claims that are inconsistencies with the anime, like Krillin meeting Gohan in the Garlic Jr movie or Vegeta appearing as a SSJ in the Meta-Cooler movie (which is supposedly before the Android saga).

That's just animation differences. This pic looks similar to the Gohan from the filler episodes about Tao Pai Pai. In this one, he is powered up and serious, so the animation changes.

Since you're manga fanboy, please help me find which was the release date of The Djinn Awakens?!. The Majin page says it was on December 2nd 1994, which would be five months after its anime counterpart Buu Is Hatched aired, so I think it's wrong.

Then that info is wrong. Thanks for your help.

Since you've read the manga, find the veracity of this.

Hmm.. I'll re-check the fight, but for what I can remember, Freeza did offer Goku Ginyu's spot, but not after Goku's kaio-ken x20. I'm pretty sure it was before Freeza started using 50%. and I don't remember anything about Captain Ginyu being 2nd in command to Freeza SSJ3Vegeto (talk) 17:08, December 6, 2014 (UTC)

HI I am leaving the dbz chat on wikia since people ignore me or are just mean thank you for your use to caring waysLegacyhunters (talk) 04:07, December 14, 2014 (UTC)  this was an old message he

i am really leaving dbz i am going on http://anime-arts.wikia.com/wiki/Anime_Arts_Wiki, naruto, pokemon or yugioh the mods are kinda jerks Legacyhunters (talk) 05:22, December 30, 2014 (UTC)

sry 4 being mean last time, anyways i was the one that said hi and poked you without a signatureLegacyhunters (talk) 08:33, February 9, 2015 (UTC)

Add [[Category:Nonexpiry blogs]] to your blog and it won't be blocked for commenting after 30 days.

Do you remember the name for SS4 Goku's powered up form when he absorbs the powers of Gohan, Goten, Trunks, and Pan? It's something stupid like "Super Duper Fighting Full Power Saiyan 4".

idk, I've seen a name for it that starts with "Super" and then there's something retarded in the middle like "Full Fighting Power Ultra Mega" and then finishes with "Saiyan 4".

Retrieved from "https://dragonball.fandom.com/wiki/User_talk:SSJ2_Gogeta?oldid=1367603"
Community content is available under CC-BY-SA unless otherwise noted.