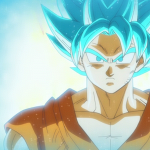 Hi, SSGKakarotto, welcome to Dragon Ball Wiki! Thanks for your edit to the Trunks page.

Hi there. The MoS provides guidance as to article style for cases of the same events being covered by multiple sources:

Like we do for the manga/anime versions of DB and DBZ, the info is put in one section with reference tags used to denote the source of particular statements. Writing separate versions of every article for each source (manga, anime, movie, video game, etc.) is possible but not what we currently do. Super gets the same treatment: one section stating the events from all sources. A small handful of articles were formatted incorrectly, which may have been a result of us not knowing the first several Super sagas would be the same as the movies with only minor deviations. --

I don't understand your question. The current policy is that when multiple sources cover the same events (like BoF and RF movies, anime, and manga which are versions of Super), it is written with in one section on the relevant articles with reference tags used to differentiate sources for particular statements when needed. --

Repeated edit warring, and ignoring the manual of style will lead to a ban. If you have a problem with something, use the appropriate talk page for the subject instead of edit warring.--Neffyarious (talk) 05:59, April 22, 2016 (UTC)

But doesn't the Manual of Style say you have to leave it before it was undone? By that, you should get the warning but no other admins are on to see SSGKakarotto (talk) 11:48, April 22, 2016 (UTC)

I'm talking about the Frieza page, you changed it just because you thought it looked better your way - ignoring the MoS as to how the pages are set up in the process.--Neffyarious (talk) 12:07, April 22, 2016 (UTC)

But it was a mess. It doesn't look good an it confused me , so i changed it back. Why is it conbined rather than separate? Too many contradictions for a series section and the to are films, not part of Dragon Ball Super ~~<~

Stop undoing the factual trivia based edits if you cant disprove the edits then don't undo them. Beyonder (talk) 13:49, April 25, 2016 (UTC)BeyonderGodOmnipotent

What?......and you DONT know what trivia is do you? Trivia: details, considerations, or pieces of information of little importance or value. So good day sir. Beyonder (talk) 13:53, April 25, 2016 (UTC)BeyonderGodOmnipotent

Dude.  What is your problem with me?  All i have been doing this entire time is adding the entire areas of the events of the tournament with some pictures.  I am not vandalising shit.  But then for some reason, some dick removed the enire sections that I had added for no reason at all on Hit during his full fight with Goku.  I mean, what the fuck? I added alot more to the page, so stop removing the picutres because you feel like it or saying that I am vandalising stuff.  i only undid some things in an attempt to replace the area that had been deleted and the pictures that everyone is deleting for no reason.  These pages need some pictures. So don't get pissy at me for just trying to help add parts to the page that other people don't want to do. TNTDiscoCisco (talk) 01:40, April 26, 2016 (UTC)

Thank you for tagging articles for deletion using the template. You may have noticed that the template you've been using states "Do not remove this notice or blank this article." Please follow these instructions and do not delete article text when you mark them for deletion. Thank you. --

Hi why did you delete my post in Yamcha's page

Retrieved from "https://dragonball.fandom.com/wiki/User_talk:SSGKakarotto?oldid=1458649"
Community content is available under CC-BY-SA unless otherwise noted.