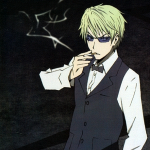 Hi, Neffyarious, welcome to Dragon Ball Wiki! Thanks for your edit to the Broly page.

Sorry, we can't have the articles here with just a minor amount of data and no actual information. When I compile all the info and add it in the future, we will have articles for characters like Frieza [it will take a lengthy amount of time] but we won't be adding the articles with minimal info. In the future, do not create these articles as I will be forced to delete them until I have compiled all the necessary data. -

The Card you said was based off of Future Trunks is a Fan Made Card and does not have anything saying it is based off Future Trunks.  Goku20  Talk  ULTRA DBZ  ULTRA POKEMON  07:55,3/31/2013

Hello. There is a error in Future Frieza and Future Cell pages: both of them WASN'T ressurected by Future Babidi, but he just created clones of present Frieza and Cell that attacked present timeline based on Z-fighters memories. And how future Cell was ressurected in Perfect form if he died in his Imperfect form? Those Frieza and Cell in game are just clones based on memories of Z Fighters about them, as well as clones of Z Fighters themselves.--Super Perfect Cell1 (talk) 16:56, May 11, 2013 (UTC)

How Future Cell can be ressurected in Perfect Form if he died in Imperfect Form? Furthermore, he just CAN'T get Perfect Form because in alternate timeline androids were already killed and also in hell he still won't be able to get Perfect. In chapter 2 Babidi said that he made clones of Z Fighters, Cell and Frieza (Future Cell wasn't in Perfect and he couldn't get it; Babidi created clone of final form of Frieza because only Goku and Trunks saw his Mecha form) based on the memories of the real Z-Figthers themselves. If you need a screen, i'll show you. Also, how Future Cell and Future Frieza could be ressurected and came back to life if Babidi don't have that much power of his magic similar to Dragon Balls? Super Perfect Cell1 (talk) 10:27, May 12, 2013 (UTC)

In the beginning of game Babidi had read memories of Trunks and of course created clones based on memories that he did read. This is NOT FUTURE Frieza and NOT FUTURE Cell because Future Cell was killed in Imperfect form and for him reaching perfect form with dead androids is impossible. That was just a clones based of memories of Trunks about Frieza (strangely that his mecha form is not in the game, but nevermind) and Perfect form of Cell that attacked present timeline. Later Babidi explained that and then created also a clones of Z-Fighters themselves, or you will say it's ressurected Future Z-Fighters?

I don't know where you got those power levels for Gekishin Freeza, especially since Frieza doesn't have his 100% Power form in this game. Here are the real power level numbers (BP): http://lucifer.s14.xrea.com/hobby/reizouko/

And, in fact, we don't even add the power levels on the video game pages. They're for the list of Power Levels page.

Thanks for your edits... kinda. You make some assumptions on yourself.

Plz stop edit wars, you're adding wrong info in the articles. thanks plz

Please do not edit war. It is not allowed on the site. Simply use the talk page to discuss the issue, then change the page once when a consensus has been reached. --

I believe he did use the Talk Page at a few points.User:Destroy Us All|What are you so afraid of Cell?

Using the talk page is not a free pass to edit war. He made the same edit back and forth like 10 times. --

gee, that was a good one. where did you get this pic from?

Are you japanese? or did you download it? send me the link if you did the latter

Good find with those. It would be a great addition to the articles if you finds images of those forms. --

You shout read the interview with Akira Toriyama once again: http://www.kanzenshuu.com/translations/episode-bardock-akira-toriyama-super-qa/ The note precises "It is unclear whether Toriyama means Freeza was born from only one parent, or emphasizing that only Cold carried these traits." Also, the source doesn't mention Frieza's birth was unnatural, even if they were asexual, asexual reproduction is a nutral way of reproduction used by several animals and plants in the real world.

"These two are the only ones who possess an abnormal [level of] battle power and cruelty" Abnormal doesn't mean higher. And Cooler, base or transformed state, isn't mentioned at all. His high power level could have been considered normal because he trained to gain it, contrary to his father and brother who gain it because of their mutation.

10:29, February 6, 2014 (UTC)
"Freeza's father is a mutant with an abnormally high battle power" "still in strong possession of these mutant traits was Frieza" "These two are the only ones". It is aid that only the two of them had abnormally high battle powers, the fact that Cooler was excluded mean he does not have one, abnormally high power means a power different from usual, so if Cooler had a high power gained it would still be abnormal for him to have the power, Frieza and Cold are also the only ones stated to have sch a high power.Neffyarious (talk) 10:35, February 6, 2014 (UTC)

First of all, Cooler was excluded because he's a movie character. Second, the source doesn't compare nor mention Cooler, so it can't be used as a source to say his power is less than that of King Cold and Frieza. If he was mentioned, it might have been used. But it doesn't specificially say "King Cold and Frieza are stronger than Cooler" so you can't use this as a source to compare Cooler's power level to anything. Cooler isn't mentioned, so it can't be used on anything related to Cooler.

10:48, February 6, 2014 (UTC)
Cooler isn't said be weaker than King Cold and Frieza, he's not said at all. He isn't mentioned. The source reveals nothing about Cooler.

The source joins high power and cruelty. Which could mean they're the only poweful people of their race being evil, or the only evil people of their race being so powerful. Which implies strong member of the race exist, but they're not as evil as Frieza and King Cold. Cooler was shown to be less crual than Frieza and even respected his opponent and compliment them. He might feet in this category.

11:01, February 6, 2014 (UTC)
I really doubt that Toriyama meant that they are the only people who are both cruel and evil. But even so Cooler blandly stated that he had seven planets to destroy in his first appearance, and claimed that he was the one who decides who lives and who dies, and that all living things were mere plaything to him, and was said to have murdered millions of innocent people by Goku, millions more would have died had Cooler destroyed Earth. Those are cruel words and the actions are very curel, much crueler than anything that King Cold said or did, and at least as bad as Frieza.Neffyarious (talk) 11:12, February 6, 2014 (UTC)

He does this because it's his job. It's what his cruel father and brother are doing, so he's just continuing what his family's empire is doing. If was raised to do so, he does so. Yet, he spared Goku and wasn't that cruel in his appearances in the movies. Frieza killed children himself, murdered one of his soldiers because he showed fear, turtured Nail, impaled Krillin with his horn, made him explode, etc. Cruel isn't how many you kill but how you kill. It's the methode employed that matters.

11:39, February 6, 2014 (UTC)
Crel means "willingly causing pain or suffering to others, or feeling no concern about it". The only reason he spared Goku was because ot was Frieza's mess, he didnt want to get behind on schedule, Goku's life meant nothing to him. He also shot Piccolo through the back. He also casually stated that he was going to blow up seven planets and did not seem to care that he had killed millions of people.11:45, February 6, 2014 (UTC)Neffyarious (talk)

Retrieved from "https://dragonball.fandom.com/wiki/User_talk:Neffyarious?oldid=1230330"
Community content is available under CC-BY-SA unless otherwise noted.