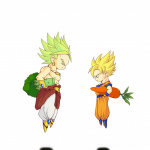 Hi, Kakarot81, welcome to Dragon Ball Wiki! Thanks for your edit to the User blog:Kakarot81 page.

Hey Kakarot. I thought you might like this avayar. I think it would be fitting because if Goku stayed as an evil Saiyan he would look like this and his name would be Kakarot, the same as your name. Tell me what you think. You like it?

No problem man, just remember to sign your posts okay? ;)

Your sig looks good. Also your avatar is quite the funny one. Haha. Kakarot with a Carrot and Broly with some Broccoli. Nice!

Hey Kakarot, how was your Thanksgiving mate?

That is good to hear. I don't celebrate thanksgiving. Remember, if you want to show off your new sig, you have to sign ;)

Im not sure what you mean, but if you make a Broly amv make sure to use as much clips of him in his 1rst movie, people seem to like him loads more back then. --

I won't be needing any credit man, you just asked what you'd want to see in a Broly amv, and I gave some suggestions, the creation is all you. --

Yo supp dad? How are u? Gohan ibbe .Talk • Contribs.

Hey bro, just wondering, you know how I made your sig for you? Have you signed my profile? If not, would you like to have a look through it and then give it a sign at the bottom? Thanks bro!

In a day or two. Kotsu the EM Wave Hero

You were reported to me several times for cursing and also for flaming another user. That's not acceptable behavior. Please take the day or two wisely to reflect, on both your actions and your behavior. And don't be so upset, I have given people a week without chat as punishment before, so you got off relatively easy. Kotsu the EM Wave Hero

Jump on my man

Hey buddy, yeh not a heap for me really. Got exams next week so making this frieday a bit of a chill actually. Got Footy late morning tomorrow and basketball a bit later on in the afternoon. Going to a friends to study in between that too. Staright from home to footy, then to her house, thewn to basketball and then probably to another mates house to do a heap of study haha. How have you been my man?

Re: Drayden Whats Up

Hello Kakarot81! Lol That is hilarious man. xD It actually matches the sequence of the gifs. Chris Evans is one of my favorite actors. I have been a fan of his since his Fantastic Four days. My avatar is a picture of Jessica Tyler. She is a Canadian actress who portrays Jenna Middleton on Degrassi. :3 Wait, you thought it was a real picture of someone? xD -- Template:Dray2 16:07, June 28, 2012 (UTC)

Mister Evans is just amazing bro! I don't think he's very underrated now. Many people know who he is nowadays. The role of Captain America is exactly what he needed to boost his popularity! :D Haha no bro. It was a candid photo of Jessica. xD I'm sure you're not the only person who thought that so it's okay. lol Well based on your chat ban log, it says that Kotsu has banned you from chat on May 21, 2012 and it will expire August 19, 2012. It is a 3 month ban. His reason says "On second thought, considering all of the kickbans he has already gotten for harassment and breaking rules, I'm upping it to a three month ban." Unfortunately, you're just going to have to wait until August 19 for your ban to expire as I highly doubt Kotsu will unban you. -- Template:Drayden1 18:24, June 28, 2012 (UTC)

Re: WHAT THE HELL

I don't know but take it up with Kotsu. I believe the only person who can unban you is the mod that banned you in the first place. I don't think it'd be right for any other mod to unban you since Kotsu was the one who gave you your ban. I'm not really a fanon type of person but I'll be sure and check it out when I find time! :D -- Template:Drayden1 18:55, June 28, 2012 (UTC)

I'm going to be completely straightforward and tell you that I banned you for so long because I have kicked you a number of times for harassing other users and cursing. Every time I raised the ban a little, you'd just completely not learn your lesson at all. The last time I banned you, I had about three users reporting you to me for harassing them and then you proceeded to curse at everyone in chat. From what I've seen of you lately, your behavior hasn't improved a bit. You will wait out your sentence just like everybody else that's been banned. Kotsu the EM Wave Hero

You don't deserve it? What about that entire talk page message I got from you? "Oh yeah, Kakarot81 just cussed me out and was real kind about asking me to be unbanned." Oh yeah, you're real innocent. Your entire message is a contradiction to you "not deserving the ban". I don't tolerate that kind of behavior in chat, and I'm sure the admins would have a field day if they saw how you've been acting just now. And you should probably see a counselor about that temper of yours. Anyhow, have a nice day. Kotsu the EM Wave Hero

You have banned for 1 week for Harassing another user and for excessive use of profanity. If you really need to the links as to where you did this here is [1] and [2].

Profanity is not allowed on this site, as per the rules page. Using profanity will result in loss of editing privileges. --

did u call me hot on one of my usless i'm leaving blogs? (