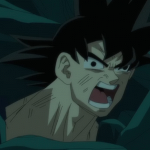 Hi, Jim Green, welcome to Dragon Ball Wiki! Thanks for your edit to the King Cold page.

It isn't a new form go read 10X talk page on the matter it. The section I am suggesting you read is the edit warring section which should be the very last section.  Goku20  Talk  ULTRA DBZ  ULTRA POKEMON  22:01,8/12/2016

Please follow site policy which means to use the article talk page after your edit has been undone once till a consensuses is reached, also that form is not Ultra Super Saiyan 2 it is just Super Saiyan Third Grade. It doesn't matter how long before one anther they were taken all that matters is that the pictures are of the same character and form which means they are the same one might be better resolution then the other but only difference.  Goku20  Talk  ULTRA DBZ  ULTRA POKEMON  14:23,8/13/2016

Site policy is to leave the article as it was before the disputed edit (Your edit) was made till an overall consensuses is reached on the article talk page. So please follow site policy failure to do so will end with an admin handling the problem.  Goku20  Talk  ULTRA DBZ  ULTRA POKEMON  18:03,8/29/2016

Sorry to intrude guys, but please discuss this on the talk page so other people can join in and everyone can reach a proper consensus. Undoing each other's edits over and over again isn't really solving the problem here. -- • Final Chidori • Talk 19:49, August 29, 2016 (UTC)

The rules page also states that a user can remove any message from his/her talk page after they have read the message.  Goku20  Talk  ULTRA DBZ  ULTRA POKEMON  08:43,8/30/2016

Look dude, I agree with you on the black rose issue but you can't just call other users "dicks". Yeah, I know it can be extremely frusterating to have people revert your edit over and over again, but resorting to that won't help your case and an admin will be forced to ban you in the end anyway, for both edit warring and being rude to others.

I'm not an admin, so I'm not going to force you to do anything here. Instead, I'm going *kindly suggest* that you revert your own edits on the page and apologize to the two users you called dicks, then move on to discuss it on the talk page until a consensus is reached, mainly for your own sake since I hate to see active contributers get banned over silly stuff like this. Again, I get that it's pretty annoying having to wait for a consensus, but the talk page is there to prevent incidents like this and to help users communicate with each other. Thank you. -- • Final Chidori • Talk 13:16, August 30, 2016 (UTC)

Don't add speculation to an article, don't use profanity in a article, and don't add opinion(s) to an article. Please follow site policy. Also you are not the first user to call me a name and while yes it does call for me to report you for edit warring and name calling I am trying to not do that yet but if you keep braking the rules I will.  Goku20  Talk  ULTRA DBZ  ULTRA POKEMON  18:11,8/30/2016

Piggybacking on Goku20's warning, don't do this. All it does is help you get banned. I'm actually bit disappointed because I know you're a nice guy and you're just getting frustrated, but vandalizing articles is not the way to go about solving problems. Everyone is on the same side here and I'm sure Goku20 and Pie aren't reverting your edits out of spite for you or anything. Everyone simply wants to make the article better. -- • Final Chidori • Talk 19:14, August 30, 2016 (UTC)

While it is in the European collector's edition of the game it is also in the American one just check out Gamestop.com.  Goku20  Talk  ULTRA DBZ  ULTRA POKEMON  22:19,9/6/2016

You are in the wrong for not following site policy when you edit warred instead of using the article talk page after your edit was undone the first time and leaving the info you added off of the article till an overall consensuses was reached on the article talk page, and when you called me a boy, so you broke the rules, which means you are in the wrong. If you keep breaking the rules you will be reported and the wrong I left you is the last one I am leaving this time around so the next time you break the rules I will report you.  Goku20  Talk  ULTRA DBZ  ULTRA POKEMON  15:07,9/22/2016

I would like to say that I don't care if you get angry or not because if you do and you let your angry control you like you have in the past then you only hurt yourself.  Goku20  Talk  ULTRA DBZ  ULTRA POKEMON  15:38,9/22/2016

are you captain jim logan?

The talk page was not touched in weeks, that's why I renamed the page. Also, before telling me that I use the talk page (thing that I did weeks ago), you have to use it too. You have only renamed a lot of pages for no reason, which goes against the site policy. ~ Yon ~

Please refrain from altering the page name (especially without discussing), or else you will receive a block.--Neffyarious (talk) 13:46, March 18, 2017 (UTC)

Hey, For Vermoud's name, don't have a source, but his name was given after the drink "Vermouth". Toppo pronounces it as Vermouddo-Sama, but some fansubber thought it was Belmod. I just heard Vermouddo and it ties back to Vermouth pun. -...

Berumoddo* Belmod is not from fansubs, is from the official subs from Crunchyroll, and please, sign your post with four tildes. ~ Yon ~

Hate to be a bother, but I honestly don't think there are any sources which say Super Saiyan Blue makes you thinner or taller. We've seen Goku and Vegeta transform from their base to SSBlue on-screen and no such physical mutations occur. If you can find a source I'd appreciate it greatly.

Please do not use personal insults like called someone "obnoxious little brat." We are all on the same team trying to keep the site accurate and up to date. When there is a difference of opinion, insults and edit warring won't help. Civilized discussion on the article talk page will resolve the issue for you much more easily. --

Please stop changing the names of some of the Gods of Destructions from their official sub names to unofficial fan translations. I know the fan translations are more accurate, but we use the official info.--Neffyarious (talk) 12:23, August 27, 2017 (UTC)

We don't really use that word much here as it is fairly subjective, please be careful what information you add when in regards to any Canon or non Canon material.Bullza (talk) 20:51, April 21, 2018 (UTC)

DragonEmeperor, if you look at the thread, it says the height in cm. With that in mind, Jim Green is right. 187 cm is 6 feet and 1.62 inches, which is approximated to 6 feet and 2 inches.

Retrieved from "https://dragonball.fandom.com/wiki/User_talk:Jim_Green?oldid=1862781"
Community content is available under CC-BY-SA unless otherwise noted.