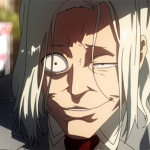 Hi, welcome to Dragon Ball Wiki! Thanks for your edit to the Forum:Least Favorite Character? page.

I see that you too have become stuck with the disabling of comments. What you need to do is go onto your blog, click edit and then tick the box that says commenting. This box is located towards the top right hand corner. Hope this helps BardockGoku  talk  contribs

Yeh, I spoke with Callan. he is fine no problems really.

Just a question xD WHO THE HFIL IS YOUR AVATAR GUY? xD

He fights for good, he's former villain, that means he was villain

why do you say that? he never fought for good, only destroying planets for freeza and for avenging his friends (which is kinda selfish)

This is the typical American Dub BS. In the Japanese original, it is made very clear that he is a cruel murderer and cares about nothing but his own race. Caring about your race does not qualify you to be a good guy when you still commit genocide against every other race. Bardock is evil, deal with it. DraculaCronqvist (talk) 20:40, June 29, 2013 (UTC)

I agree with ya, bro. (I even think King Vegeta is good'er than Bardock, because he cared about his son, and Bardock didnt care a little bit about Kakarot)

I'd never agree Bardock's a villain, but lets set that aside for now. Are you telling me that people think Bardock's cool 'cause the games portay him as good? Dude, along with me there are many who think the villains of the Db series are cool(personally I don't like any of the Buus, or any of the GT villains, well, I don't like anything in GT or GT itself, which has very less originality, stealing ideas from other Db media and from other stories, a special hatred towards Pan and the series' music and Goku's immaturity which should be non-existant in fact. The only thing I like about it is SSJ4 and Gogeta, who was also somebody else's idea. In fact I felt that it was just another one like Path to Power or Mystical Adventure). There are many on this wiki who are fans of Frieza and Cell, me included. I am a fan of Broly too, and I believe that I am also among the many on that respect.Undominanthybrid (talk) 16:15, June 30, 2013 (UTC)

That image was fake.

Well that's interesting. A well done fake, at least. Still, my original statement about the ridiculousness of the Scouter games battle power remains true. There is absolutely no way that Burori is stronger than any other character in DBZ. DraculaCronqvist (talk) 01:11, August 6, 2013 (UTC)

Retrieved from "https://dragonball.fandom.com/wiki/User_talk:DraculaCronqvist?oldid=1155721"
Community content is available under CC-BY-SA unless otherwise noted.