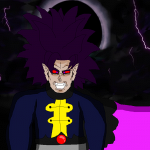 You have to consider the fact that this is a general Dragon Ball shout out from an external source. They can't be sure that viewers have even seen the Tree of Might. Goku is far more recognizable so there's nothing to suggest that it wasn't intended to be him. I could make the argument that: 1) Turles' armor does not look the same and 2) his hair pattern is still different from Turles. Because it's a parody and not official they will not make things exact. In any case both Goku and Turles have been listed and are equally valid. Stryzzar (talk) 15:43, August 30, 2018 (UTC)

Please refrain from uploading duplicate images, even if there expressions are different in each photo if they are in the same position and scene they are considered the same and will be deleted.--Tuxedo12 (talk) 20:12, July 14, 2019 (UTC)

Please refrain from uploading multiple duplicated images, images should be properly named so that it is easier to keep track of and failure to follow wikia policies will result in you being blocked.--Tuxedo12 (talk) 21:51, July 14, 2019 (UTC)

Don't add false information into articles or information with no source that is not obvious to people to prove that it is official. That can also be a form of fan speculation. You can get banned for that. (Sosuagwu17 (talk) 01:53, August 11, 2019 (UTC))

Retrieved from "https://dragonball.fandom.com/wiki/User_talk:DrWhofan7?oldid=1862979"
Community content is available under CC-BY-SA unless otherwise noted.