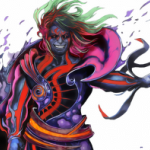 Do not vandalize other user's user page. Thank you. --

Why did you just undo my own replacement of the talk page comment marking you as a vandal on my talk page? I was the one who replaced it, I fixed the user page you vandalized, and I already wrote you a warning, so I obviously saw it. --

Hey Ultimate,you were looking for me? Why?

When a guy vandalizes a User Page, asking him to not do so is giving him what he wants. It's best just to ignore him and let Old Ten Timer or SSJ4 know (I already told SSJ4 of this guy BTW).

I saw that 'Ask 8 Ball' thing on your profile, so I decided to give it a whirl. Now I am legitimately scared >>>

Strange thing is, I typed in "Is Destroy Us All my mother?" first, but it said no. So you must have adopted me somehow and then ditched me when you changed your name. I'm going to ask 8 Ball if you do 'things' to Miri

I actually was planning on unbanning Geti, but I never got the chance to. I might unban him later today though, so don't worry!! =)

Do not use profanity on chat or harass others. Doing so may result in loss of chat privileges. --

Hey, Destroy Us All, SuperSaiyan17 here. You wanna get in touch? I got a few ideas I wanna pick your brain for.

My email is is utkarshlal650@gmail.com

If ya wanna talk anytime, I'll be ready.

I have taken both users that were harassing and/or using profanity in that screenshot. Also, when you put an image on my page, can you make it smaller? I can click it and view it full size, I just don't like how there are so many images clogged up on my talk page, and they're too big, so I always mistake a former screenshot as the new one because it's jutting down into the next message. Thanks, I'm a bit OCD like that. >.<  Dark Seeker Kotsu   21:35, May 7, 2013 (UTC)

Sure, here's the link. I discussed it with my wikians and they all told me they would not troll again. (http://undeadfanstories.wikia.com/wiki/Undead_Fan_Stories_Wiki) Hallowseve15 (talk) 21:56, June 29, 2013 (UTC)

Retrieved from "https://dragonball.fandom.com/wiki/User_talk:Destroy_Us_All?oldid=1136388"
Community content is available under CC-BY-SA unless otherwise noted.