The other night I got to thinking about who I would personally consider the 10 most powerful characters in the Dragon Ball Universe (not counting GT or video games...) as of December 2013. I am counting the films, and it should be noted I won't count specifically a "form", but rather the character in general, as the form is part of the character. This is the list I came up with, obviously nothing is official, just taken from my personal research and beliefs. 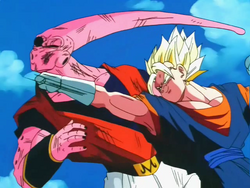 By the time Vegito appeared in DBZ, Majin Buu had become so ridiculously powerful, the only way to take him down was for Goku and Vegeta to utilize the Potara Earring Fusion; subsequently fusing them into the most powerful being in "Dragon Ball" history. Vegito was so powerful, even without ascending into a Super Saiyan, he was able to overpower Super Buu, who at this point had added not only the powers of Goten, Trunks and Piccolo to his own, but also the power of Gohan, who had previously utilized his newly unlocked hidden power to completely dominate Super Buu, and was only outdone when Super Buu absorbed Super Saiyan 3 Gotenks, both of who were around the same level of power, as evidence of their fight both in and outside of the Hyperbolic Time Chamber. The Buu that Vegito fought is largely considered the most powerful villain in DBZ, having added his already ridiculous power with that of "Ultimate" Gohan's, and the incredible fused power of Goku and Vegeta turned him into a rag-doll. As such, Vegito gets my recognition as the most powerful being in "Dragon Ball Z". 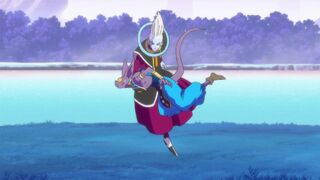 While this character is very new, having only been revealed earlier this year within the new film Dragon Ball Z: Battle of Gods; he is a truly mysterious powerhouse, being more of a neutral character then anything else. During the events of the film, he is showcased as the attendant of Bills, the God of Destruction, a being so powerful as to be able to take down Super Saiyan 3 Goku in one hit. However, it is revealed at the end of the film that Whis is actually more powerful than Bills, and is also the martial arts teacher of the God of Destruction. He also knocks Bills out with one strike to the neck, putting him back into his slumber at the end of the film. As such, this mysterious character gets my #2 spot. 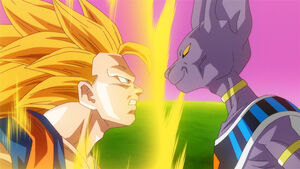 The main antagonist of the new film Dragon Ball Z: Battle of Gods, Bills was actually stated within a promotional poster to be the most fearsome being in "Dragon Ball Z" history. While I don't necessarily agree with this, due to the nature of the quote comparing him to past villains such as Frieza, Cell and Buu, I would undoubtedly agree he is the most powerful antagonist in DBZ history (his status as a "villain" is up for debate). Bills is so powerful, he is able to take down Super Saiyan 3 Goku in a single blow, defeat Fat Buu, take out "Ultimate" Gohan within a single kick, un-fuse Gotenks, and wipe the floor with an enraged Super Saiyan 2 Vegeta. It is not until Goku obtains the power of Super Saiyan God that Bills is faced with a challenge, and even then admits to using only about 70% of his full power during their battle. He legitimately defeats Goku, which very few characters have the title of doing so. As such, he gets my #3 spot. 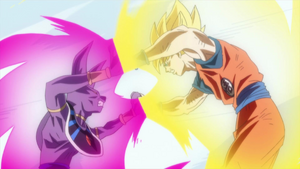 Now, you're probably saying "WHAT!? How is Goku ranked higher than Super Buu and Gohan etc"? Well, thanks to his new-found power acquired during "Battle of Gods", he is. Super Saiyan God puts him at a level decently close to Bills, who had taken him down as a Super Saiyan 3 with one blow. With his new power, even after the form diminished and his body absorbed most of its power, Goku has ascended into a whole other level, officially and without a doubt securing his place as the most powerful Z Fighter, and as such, he gets #4. 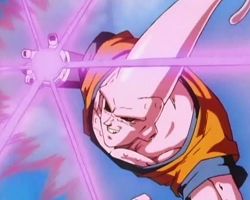 In his basic "Super" state, Majin Buu was a force so great, Goku believed only the fusion of Goten and Trunks would have a chance. Until transforming into a Super Saiyan 3, Super Buu essentially toyed with Gotenks, and even after that, boasted he was simply buying time until Gohan's arrival. Ultimate Gohan dominated Buu, but after absorbing Super Saiyan 3 Gotenks, quickly took him down. At this point Super Buu had added the power of a fused Super Saiyan 3 to his own, and after absorbing "Ultimate" Gohan, Buu's already outrageous power shot up even more. It was made clear by Goku that even the basic Super Buu would wipe the floor with he and Vegeta, imagine what Super Buu who had absorbed the incredible power of Gohan could do? If not for fusion, they'd have been absolutely decimated. As such, Super Buu is definitely the most powerful non-movie DBZ villain, and was only outdone by the insane power of Vegito.

Wait, Gogeta is below Goku??? Keep in mind, the Goku above is his power tier within "Battle of Gods"; which I believe is above the resulted fusion taking place in "Fusion Reborn", while Goku was obviously much weaker. While the Potara fusion produces a greater power then that of the conventional Metamoran Fusion, Goku and Vegeta's fusion during Dragon Ball Z: Fusion Reborn produced an incredible result, Gogeta. As Gogeta, he took down Janemba in a matter of moments, a villain who had previously bested Super Saiyan 3 Goku in battle. As such, Gogeta is a powerhouse of a fusion, though not as powerful as Vegito. He gets #6. 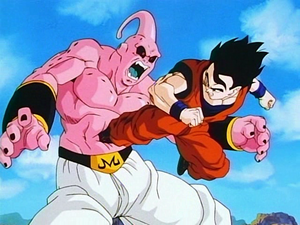 While Gohan's appearances in the films Dragon Ball Z: Wrath of the Dragon and "Battle of Gods" appear to nerf his overall power, having been outdone by Super Saiyan 3 Goku's power (which negates what we know from the original manga and anime) we're still talking about a warrior who at the end of DBZ, had his hidden potential unlocked and completely dominated Super Buu, who had previously proved to be more powerful then Super Saiyan 3 Gotenks and was stated to be too dangerous by Goku for he and Vegeta to try and fight. By all accounts, Ultimate Gohan is the most powerful non-fused Z Fighter (until Battle of Gods that is), and such, has earned #7. 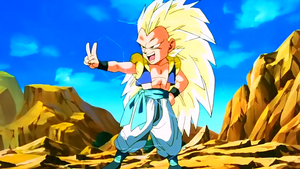 The fusion of Goten and Trunks, Gotenks becomes one of the most powerful characters in DBZ. Believed by Goku to be the only hope for taking down Buu, in his Super Saiyan form is able to hold his own against Super Buu, and once transforming into a Super Saiyan 3, appears to even surpass him in power, although this is debated. Like Gohan, his power appears to have been nerfed in films such as "Wrath of the Dragon" and "Battle of Gods", probably with the intention to level the playing field for Goku and Vegeta etc. Nevertheless, Gotenks is incredibly powerful, and until the appearance of Ultimate Gohan, the strongest Z Fighter at the time, thus earning him #8. 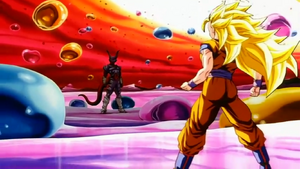 Hirudgarn was hard to place, because he defeats both Ultimate Gohan and Super Saiyan 3 Gotenks, while in the end being defeated by Super Saiyan 3 Goku (who shouldn't be anywhere as powerful as them). However, from what we see, he's a tank, and has enough power to defeat both of them as well as Super Saiyan 2 Vegeta. He also proved to be more powerful then Super Saiyan 3 Goku until his weakness was discovered and he was subsequently defeated. Nevertheless, he takes down three of the most powerful characters in the series.

Honorable Mentions (in no order)

Retrieved from "https://dragonball.fandom.com/wiki/User_blog:SSJGoku93/Ranking_the_Top_10_Most_Powerful_Characters_in_%22Dragon_Ball_Z%22?oldid=1201580"
Community content is available under CC-BY-SA unless otherwise noted.