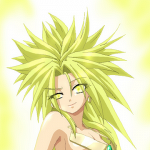 21, currently working in a movie theater. Some College. Graduted High School in 09.In a long term relationship with the love of my life. Love gaming. I've become a PC gamer after the 360 let me down(multiple times). I've been a fan of Dragon Ball since the late 90's. I loved Toonami, have been an anime ever since  Toonami.    Oh might as well let you all know I've been made aware of my poor grammar, so please stop saying it.  Definitly crazy... a lil bit hyper. Trying to learn basic Japanese self taught. ENG is my first language. Have 2 dalmatians(liver).  Own the entire series on DVD DB-GT. Also have   most of Z on VHS mis of uncut/Edited. Working on getting the Dragon Boxes. Had all of the movies, missing   5 or so now.  Currently Playing The Legacy of Goku 2, Budokai(GCN), Budokai 2(GCN), Budokai Tenkaichi 2(WII),but have others.

">Hmmm I Guess Frieza form /3 my favorite character or maybe kid Goku from Dragon Ball. Of course I love Goku he is my hero etc etc. There is just something about the 3rd form of Frieza that I like. Acutally I lied my favorite character was or is Mr. Popo, i had one of the super tiny miniature action figures that came in the lil square packages. Like less than an inch tall.I mean tiny, im trying to find some images on google, they came in packs so you didn't know what you would get. They where smaller than some coins. I remember having a popo and saiyman. They where the size of the figures that came with my namek space ship pack which was the size of like 2 quarters.</p>

I had a grandfather who sold toys and those minis where some of what he had, as well as the artbox series 1 trading cards cards. It seems they still manufacture and sell these, all though they could be knockoffs.

What are you so afraid of Cell?