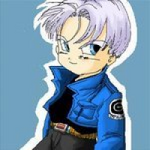 Hello everyone I`m Trunks88! I`ve been on the wiki for a little while and have liked DBZ for a long while! My favorite character is Trunks (JUST FUTURE!) Some things I like to do are draw and create things and just be creative. I also like to play almost any sport you can name. I also like to write, but I`m not very good at that. Well thats all about me hope to see you guys around! :D

﻿ This is by far my favorite DBZ character, and once more I`d like to make myself clear JUST FUTURE is my favorite, I find chibi Trunks to be very annoying. Well first this guy is just BA. second he is very unique, with his fighting style, and very unique for a saiyan. I also miss Trunks and wish he would`ve hung around for Buu. Another reason he`s great is because he`s just so mysterious. Plus his techniques are really intense and crazy!

Tien Shinhan is on this list because he is just a freakin beast! I really love this guy I think he has the best techniques of all humans or possibly any character. To begin this guy has guts he`s not afraid to challenge anybody! I also love that he was Goku`s real first challenge, and he really beat him up. I also like Tien`s dedication to become stronger. Also the reason Tien`s so high up on my list is because of his BA skills against cell!

Oh Frieza just had to be on my list! He is by far one of the most ruethless mother fudgers I`ve ever seen. I love his polite sarcastic attitude and the fact that he has respect for almost nothing. Again I also like him for his techniques, and moves. Barrage Death Beam is my favorite technique performed by Frieza(and most of the cold family) I also think it`s great how he blew up almost the entire saiyan race by barely lifting a finger, and it`s also great that he was killed(and powned) by 2 different saiyans.

ALL HAIL THE PRINCE OF ALL SAIYANS!!!! ahhh Vegeta you either love this guy or he drives you nut, and I love him. To begin he`s one of the stronger characters which is nice! Also his personallity is just great! I like how he started off as one of the coolest villains ever, then he becomes a bit of an @$$ for a while then he`s like the coolest good guy ever!! I also like his fighting style because he tries to make his opponenets fear him (when hes not getting his @$$ kicked) which is fun to watch! haha

I like piccolo for a lot of the reasons I like Vegeta. Started off evil now hes good, and that stuff, but Piccolo is just amazing I think Piccolo`s great! To begin I love the relationship he formed with Gohan. I also like his fighting style very agressive and fast! I think Piccolo has some of the best DB/DBZ/DBGT techniques of all time, I mean when I first saw him launch special beam cannon I was blown away, and he must`ve felt great like killing 2 birds with one stone. Yeah I also love how strong he is for a namek I mean namek even comes close to Piccolo!

My favorite Technique of all time is Spirit Bomb, because it`s the strongest and takes many people to use and it`s the coolest looking move! :D

Retrieved from "https://dragonball.fandom.com/wiki/User:Trunks88?oldid=403836"
Community content is available under CC-BY-SA unless otherwise noted.