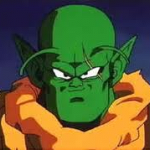 My favorite Character in Dragon Ball is indeed Lord Slug. I highly admire his rudeness and intention to win all the time. His power is amazing and his personality is infact quite awesome. He lets his opponents talk trash about how strong they are, then destroys them immensly at the end. Lord Slug does in fact have amazing power and is stated to be more powerful than Frieza. Making him as strong as a Super Saiyan. He did also appear in The Plan To Eradicate The Saiyans. Which was one of my favorite DBZ Movies of all. Lord Slug did inspire me to RP as him. Which is why I think he is cool. He is in fact one of the strongest Namekian warriors. Being compared to Piccolo gives him a very modern role in Dragon Ball Z. I love the fact that Akira Toriyama made this character to make the story better. In my opinion, Lord Slug is an awesome character that served well in the Dragon Ball Series. Great.

I also like other characters like Frieza. Frieza's immense power and lack of inconfidence makes him look as if he is the strongest villian.

Zarbon is very calm but is also very strong. Which makes him awesome in Dragon Ball. I also love how he wears his armor. He actually does behave like a top soldier.

Hes not in Dragon Ball...

I hope to be a great contribution on this Wikia by helping out with editing and chat. My dream is to one day become an Administrator. I know I have to contribute alot and that is what I am sure to do.

So please leave a message on my Talk page if you have any questions. Thanks!

Power Poll Archive | Do you have an idea for the next Power Poll?

Retrieved from "https://dragonball.fandom.com/wiki/User:TheLordSlug?oldid=954600"
Community content is available under CC-BY-SA unless otherwise noted.