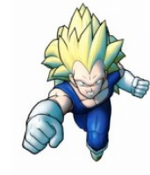 Dragon Ball/Z/GT has been a huge part of my childhood and still is my greatest interest of all time. My favourite character is Vegeta. I idolized him as a kid and still have a ton of respect for The Prince of all Saiyans. No matter what happens, he will always be my favourite anime/video game character of all time. My favourite movie types include martial arts/action (Bruce Lee, Jet Li, Tony Jaa etc), comedy & horror/thriller. I also love live acton movies (although DB:Evolution was a big dissapointment). I love video games with my main genre being fighting games such as DBZ (obviously), Tekken, Mortal Kombat, Street Fighter, Soul Calibur & SmackDown vs Raw. Another interest of my is wrestling and my favourite wrestler of all time is Randy Orton. I am also active on the Street Fighter wiki (but not as much as I am on this one). Click here to view my page on the Street Fighter wiki. The games i currently play (on PS3) are Dragon Ball: Raging Blast, Tekken 6 & Super Street Fighter 4. If you also have a PS3 and play either one and wanna play me online, just let me know. Win or lose, i'm always up for a challenge =D.

My Top 10 characters (Not including fusions):

Dishonorable mentions: Gohan (I paticularly hate Kid & Teen Gohan), Pan (A total waste), Chi Chi (Very annoying), Uub (Another total waste), Frieza (He's a good villain, but he annoys me), Krillin (He may be funny at times, but i've just never been a big fan of his), Goku (GT) (His over-use in GT just made him less appealing to me).

DBZ games I currently own (with short reviews):

Budokai 3 (8/10) - Awsome! could of been a little better, if they worked a little more on certain characters. A lot of characters lack moves in this game which is a downfall (an issue that was sorted out in Infinite World). The story mode is awsome. The Dragon Rushes are also pretty unique but it sucks that you have to randomly press a button and guess the right one so it does not match your opponents' just so you can connect with the move. It also sucks that a lot of characters have the same finish for their Dragon Rushes. Only a few characters have their own unique Dragon Rush finishes and those are Goku who has Insant Kamehameha, Vegeta who has Final Flash, Piccolo who has Special Beam Cannon, Gotenks who has a combination of Galactic Doghnuts & Super Kamehameha and Hercule who has that taunt he did on Buu when he got him to lye on the floor and took a picture of himself stood on top of him (yes, i cant believe he actually has that in the game XD). Frieza, Perfect Cell & Cooler also have the Death Beam barrage as their finishes, which is kinda unique but at the same time kinda generic due to more than one character having it. But 3rd form Frieza on the other hand has that Finger Beam barrage he used on Piccolo, which is pretty unique. Overall this is a badass game and a must buy for DBZ fans.

Infinite World (8.5/10) - Talk about taking an awsome game (Budokai 3) and making it better. Though it lacked a few features of Budokai 3, it made up for it by adding in new ones. The little mini games are a nice touch, but the downfall is that almost all of them involve you running/flying through giant rings. That kinda gets annoying when you have to keep doing it again and again. The mini games that involve you training are pretty cool. There are also other awsome mini games such as Tiens Neo-Tri beam battle against Semi-Perfect Cell, Frieza's 3rd form Finger Beam against Piccolo & Kakarot trying to catch Bubbles (It would of been cooler if they also added the one where he had to hit gregory on the head with a mallet XD) . Its a nice touch to see them covering parts of the story with mini games instead of just battles all the time. Overall, it has a unique story mode due to it covering a lot of the major events from the anime and movies. It also adds in cut scenes for certain "major" parts of the story, which is a nice touch. For those who are new to DBZ, would likely find the story confusing but DBZ fans would find it appealing. The gameplay has been improved since Budokai 3 due to it being more advanced by adding in stuff like dashes, super guard, more combos and the fact that you no longer need to go into aura burst mode to use your ultimates. The ultimates are well done and thankfully, every character has an ultimate which is something Budokai 3 lacked. They took out 4 characters from Budokai 3 which were Kid Goku (DB), Cell Jr, Supreme Kai & Uub. They did however make up for that by adding in 9 new ones which were GT Goku, GT Vegeta (who made his 1st ever playable appearence), Super Baby 2, Super 17, Janemba, Pikkon, Great Saiyaman 2, Pan & Syn Shenron (Budokai 3 only had Omega, this game has both his forms). Though, this game could still of brought back the Tournament mode from Budokai 3, oh well :) Overall, this game is a must buy for a DBZ fan.

Budokai Tenkaichi 1 (5.5/10) - The worst Tenkaichi game ever! though it has a unique character roster, it fails badly in terms of having the "DBZ factor". The gameplay is slow and bland. Also you cannot transform during battle, instead you have to choose your form whilst selecting your character. This is DBZ for crying out loud! transformations are a major deal! The story mode is pretty long and has some decent what if battles, but it is poorly presented. Thankfully the sequels were MUCH better :)

Budokai Tenkaichi 2 (8/10) - A GREAT improvement since the 1st game. By far, it has the best story mode in the Tenkaichi trilogy. It's the only game till date that features what if saga's (RB & BT3 only have what if battles). All 3 what if sagas in this game were pretty cool and I enjoyed them. A DBZ fan should definatley try out this one.

Budokai Tenkaichi 3 (8.5/10) - A HUGE character roster (despite most of the characters being usesless ones XD), biggest roster in any DBZ game to date. The gameplay is pretty awsome and has been improved greatly since BT2. It is also more balanced than Raging Blast. Though the story mode was quiet lacking and the what if battles didn't quiet compare to BT2's what if sagas, this game made up for it with its awsome DBZ'ness. A must buy for any DBZ fan.

Burst Limit (7/10) - The reason I gave it a 7 is due to its awsome graphics. As a DBZ game, it sucks. I would MUCH rather get Budokai 3 or Infinite World. The online mode is extremely laggy and sucks. I dont really have much to say about this game. On

Raging Blast (8.5/10) - Firstly lets get the bad stuff out of the way. This game sucks in terms of gameplay balance. The cancel system ruined it due the fact that once a person has managed to connect with a cancel combo on their opponent, they have pretty much won the match since they can keep spamming it continously and there is absolutley no way out of it. They have also gotten rid of the Blast Stocks meaning that there is unlimited use of stuff like Wild Sense, After Image, Instant Transmission & many other cheap abilities. Now for the positive. What makes this game unique is the fact that it is very detailed in terms of DBZ'ness. The graphics are really awsome and the closest ones the anime thus far. Its also cool that for the first time, a the online mode is well functioned and not laggy like it was in the previous DBZ installments. The moves look epic and are very detailed and well presented. It cannot be compared to BT3 in terms of characters, due to the fact that BT3 covers almost everything in the DB Universe and RB is mainly based on DBZ. The story mode may not be as long as BT2's, but like I said this game only covers DBZ thus its cool. But the story in this game owns BT3's story mode by far. The story mode itself is very well presented. If you are new to DBZ, then you may find it a little confusing but since the game is mainly targeted at DBZ fans, then its all good. They have left out specific DBZ characters and story battles that should of been there, but they sure did make up for that by adding awsome what if stories and characters. The what if battles are awsome. There are some that are not very interesting but the number of good ones out balance the number of bad ones. Then we have the two exclusive what if characters. The fans of Vegeta (*cough* Me *cough*) & Broly were certainly ecstatic to see that the two have been given SS3 forms. By far, the best ideas for what if characters to date. Though they could of made it a little better by putting in the forms as transformations rather than seperate characters, but all in all its enough as it is that they put in those forms in the game. So depsite the fact that this game is not very balanced for high level competitive play, it is certainly perfect for those that just wanna kick back & re-live some awsome DBZ'ness! A must buy for a DBZ fan.

DBZ games I have previously owned:

(No ratings for these games since they are very old to be judged with realistic DBZ'ness features).

Retrieved from "https://dragonball.fandom.com/wiki/User:TheDarkPrinceReturns_!?oldid=320574"
Community content is available under CC-BY-SA unless otherwise noted.