Hi guys, I'm Sosuagwu17 and an admin here in the Dragon Ball Wiki. In case you can't pronounce my name, Sosuagwu is pronounced (SOH - SWAH - GOOH) and it is a combination of both the first initial of my first name and my last name. 17 is there to signify the age I first started editing here so I was 17 years of age by the time I made my first edit in the Dragon Ball Wiki. Some call me Sos, Sosu or Sosuagwu here which I am completely fine with though you can call me Sam as well.

After watching the entire episodes of the Dragon Ball Series, with the exception of Kai which I decided to skip watching due to already watching the original Dragon Ball Z anime series, and keeping up with the Super anime, I decided to come over to this wiki to seek more information about the Dragon Ball series in March of 2018. At first glance, I was impressed with the amount of information this wiki had offered about Dragon Ball but knew there was some unfinished and even minor mistakes that needed to be fix so I decided to join this wiki to help on those areas in hopes of helping and making more improvements to this wiki the best way I can so it can be a really good encyclopedia to go to for Dragon Ball information and things related to it. I also had to get used to the whole media wikia coding in editing overtime while I still spent time in this wiki editing to help make improvements in areas that need improvement although I would ask other users to help make improvements in areas in this wiki I feel is beyond my capability. Other than that, I still find editing in this wiki pretty fun and okay despite the ups and downs in this wiki and problems I have faced with other users here in the past at times where there are conflicts between myself and other users but still find ways things can be resolved so conflicts can be less of issue and less frequent here so everybody can peacefully edit and cooperate with each other to edit the wiki diligently together to make it better in every aspect of the wiki. I hope I can be among the people that can help grow this wiki in the best way possible even though my way of thinking and adding content into articles is not always perfect but I'm still willing to try to improve this site in the best of my abilities and knowledge about the Dragon Ball series. If you have any questions or help feel free to contact me on my talkpage and I will do my best to help you out. You can also contact the other admins for assistance as well.

I started watching Dragon Ball when I was 17 and I’ve got to say that Dragon Ball is my most favorite anime that I’ve ever watched. Naruto and One Piece being my second favorite in rank. I definitely recommend those who watch anime and never seen Dragon Ball to watch it or those who are starting to watch anime because I’ve got to say that Dragon Ball is amazing and will always be one of the best that’s why it’s considered a classic to this day and still ongoing with Dragon Ball Super which is also one of the best anime and manga series ever. I’ve also started to grow more liking to rising series like My Hero Academia and Black Clover and other series I’m still trying to catch up on. My favorite character in Dragon Ball is Vegeta because of his personality, character, design, royalty and pride as a Saiyan. Vegeta is also an interesting character because Vegeta used to be a villain and cold blooded Saiyan turned to an ally and hero. Other characters in Dragon Ball that I favor are Goku, Future Trunks, Gohan, Frieza, Krillin and Piccolo. So yeah there you have it. This is my story of how I came to watch Dragon Ball and love it to this day.

Pages that need to be created for DBZ VHS 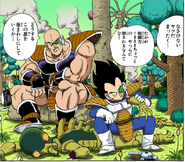 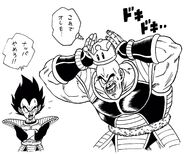 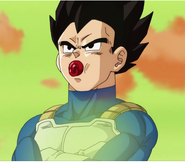 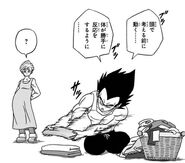 Vegeta being protective over Bulla 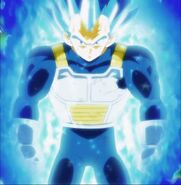 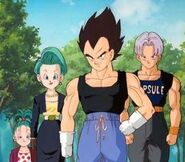 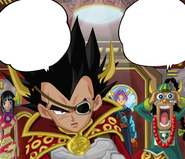