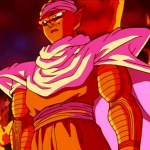 Hello World I'm SSJSensar912, but you can call me Sensar, or Tristan if you wish. I am a huge Dragonball fan and I hope I always will be. I have been a fan ever since my friend showed me the manga, once I saw it I was instantly hooked. Since then I have watched all of Dragonball Z, GT and Dragonball, in that order. I was so happy when I found this site, I was looking forward to applying my knowlage, and helping out.

I know its not much, but I give everyone my word that I will never vandalize this site. By the way 1 other thing; Anyone can ask me questions, I think I'm pretty smart at this when it comes down to it, but my answers probably won't be as good as the administrators, so I would recommend asking them first.

And just to clear something up, my user name at one time, was SSJSensar, but sadly, I lost my password. So I was forced to create a new account. So, Here I am!

Always knows whats going on, creates some great comic relief, and is an excellent example of a bad guy turned good.

Had a few moments of good comic relief, but other than that, I just don't care for her character.

-- Not really too many characters I don't like, and even though the ones above are under "least favorite" I still kinda like them.

Just an awesome character and an all around great bad guy.

One of the best moments in the whole series.

-- Piccolo's fight with Android 17, and then Cell

One of my favorite moments in the whole franchise.

-- Goku and Vegeta (Gogeta) I mean, Come on! He is just awesome.

Not sure why I thought of this, why it matters, or even why it's my favorite.

A great plot line, a great villain, great comic relief, and a great fight. Can you ask for more?

-- Wrath of the Dragon

If you see this on your talk page, it means I'm trying to talk to you! Click on "Sensar" and you will be linked to my talk page. Reply as soon as possible!

Where The Name Came From

Well, back in like, the sixth grade, I created my own Dragon Ball Z character and called him "Sensar." I went through every detail trying to see how he could fit into the series, and I decided what he looked like as a kid, as a super saiyan, 2, 3, and 4. Definantly my most beloved character I ever created, and when I created my first profile back in June of 2010, It just seemed like that should be my username. If you would like to know more about him, you can send me a message on my talk page, and who knows, maybe one of these days I'll give him his own story in DBZ Fannon.

Once again, I encourage anyone with a question to feel free to ask me, even though I might not know. But one thing is for sure, if I dont know I will tell you, so you can trust me. Hope to see you around! -- SSJSensar912

Yeah, I know, I have WAAAAAAAY too many. But the're all true.

Retrieved from "https://dragonball.fandom.com/wiki/User:SSJSensar912?oldid=1026182"
Community content is available under CC-BY-SA unless otherwise noted.