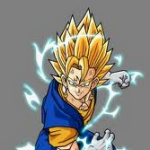 I haven't seen it but i've reads some of comics and played some of the games (Revenge of King Piccolo, Dragon Ball Origins_2), I haven't completed any (yet).

I saw all GT episodes (+ the film) and my overall review of it is that it was pretty bad, not as bad as everyone thinks though. My five favourite charcters are: SS4 Gogeta, SS4 Goku, SS4 Vegeta, Trunks and Omega Shenron. However I found Goten HUGELY dissapointing plus I expected Videl to be stronger but she got weaker! I found the movie SICKENING.

I saw Kai which was good but I found it irratating that it didn't have the Buu Saga.But since I saw Kai first the original series voices sound really freaky.I do own all the original episodes though.I also own all DBZ movies and have seen it all. I own many games including: Ragin Blast (Xbox), Burst Limit (Xbox), and completed those few but also own a few others.

By the way i'm British.

My favourite users : Honey Singh, Phierb, Barku, Ibbe, Saiyan Elite,Trunksl, Sandy, 4Starz, and Noble Trigon. I thought up my name and picked a picture faster then you can say Gonnagoandgetaaccount, and can't be bothered to change it.

1 of 10
Add photo
Found some pics, laughed my head off then put them here. Enjoy!

My favourite characters are:

1. SS2 Gohan You can probably tell by my user name: SS2 GOHAN

2.Vegito He's always been my favourite up until Gohan came into the picture.

3. Gogeta Cos he's pretty much the same as Vegito, I just barely ever see him in action.

4. Krillin. I love his ability to crack jokes at the very worst times!

This is my sig, all credit goes to Cookie (Pirate) :D

Retrieved from "https://dragonball.fandom.com/wiki/User:SS.Majin.Potara?oldid=880069"
Community content is available under CC-BY-SA unless otherwise noted.