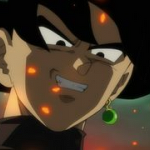 aka The God above Omni-King

Yo! I am Mielgrb10 and I have been a fan of the Dragon Ball Franchise for the past 10 years. I love Future Trunks but I hate Broly and ev

erything about him. I have researched the DB Universe and have obtained a detailed understanding of it.

This User is a fan of Goku Black.

Hello, I'm the time patroller you all know and love. You guys know me as a mute saiyan/earthling/namekian/Frieza's race/Majin who's origin is unknown. But that's not the case! I'm a saiyan and I even have a name. I'm tired of being called the "Future Warrior" all the time. My real name is Chronoksiniuses Potatz. Just call me Chrono-X for now, okay. You guys never saw me react to a thing that happened. So, I wrote this Diary for you guys to know my feelings. don't expect me to reference the dates because time travel makes things awfully confusing. Now I'll start off my narration.

Goku, Vegeta, Nappa, Raditz and Broly were the only saiyans left right? WRONG. I'm a saiyan. You all know that the saiyans went to planet Plant for habitation purposes. But not all of them. Some of the saiyans kept on living on the war-torn Planet Sadla. I'm a descendant of those saiyans. I was living a real good life there, but all of a sudden......POOF! I'm here in Toki-Toki city.

Xeno Trunks used the Dragon Balls to summon me. I was actually really confused at first. I was wondering where the heck I was. Who wouldn't be surprised?! I was in the toilet at that time. Do you guys know how hard it was for me to wear a stinky Pant this quickly. Shenron is really in need of learning the value of privacy. I was already super confused and suddenly a stranger attacked me with a sword. He then said he was only testing me. Come on, seriously?! What's the need of testing me when you made your wish clear to Shenron? I could've died! He should learn more about treating his guests. We then had a spar and as you know, I won. He explained me who he was, what was I doing there and explains my job to me. He then told me to look around Toki Toki city. I was hesitant at first but I want along anyways. To be honest, Toki Toki city is a very nice city. Well not all of it's citizen's are. Dudes like Hasuka and Iaas were so rude to me. Parcel and Ukatz were nice to me though.

Retrieved from "https://dragonball.fandom.com/wiki/User:Mielgrb10?oldid=1468049"
Community content is available under CC-BY-SA unless otherwise noted.