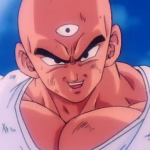 Hello, I am Kikoho-sama (Kiko) and I have been a Dragon Ball fan for about 8 years now. My friend introduced the series to me a while ago, and have been in love with it ever since. I love Dragon Ball in every media (Games, Music, Series, Manga) but my personal favorite is the manga. I love the fast paste feel to the manga of Dragon Ball, rather than the slow, horrid, incredibly long charging up version of the anime, though Dragon Ball has some of the best filler I've ever seen.

1.) Tien Shinhan - Definitely one brave mofo, Tien will always be my favorite Dragon Ball series character due to his extreme determination, and awesome sense of courage. The Chiaotzu thing is kind of weird though, but I'm sure he makes a wonderful punching bag. Finally, Neo Tri-Beam is one of my favorite techniques, I love the brutal effect on both fighters. Finally, Tien is just an all around awesome dude, I mean c'mon, he's got 3 eyes! That's awesome.~

2.) Zarbon - I can see why people would tease such a character, but dang! The man just wants to be beautiful ;P I loved the elegance of Zarbon, and the fact that he didn't want to transform, due to ruining his beauty, and whenever he had transformed he'd make an opponent pay big time! Zarbon's fight with Vegeta was easily one of my favorite DBZ fights ever.

3.) Frieza - Merciless, Evil, Crazy, Insane, what more could you ask out of a main villain like Frieza?! I mean, from the second you see this guy, until the moment of his death he is just awesome awesome awesome (Minus the little Future Trunks incident) I loved watching Frieza easily waste and kill minions he no longer needed like dirt, and just the way a little pink and white alien can come off so menacing is just wonderful. Frieza will always be the best main villain in my opinion.

4.) King Piccolo -Very closely following for favorite main villain is King Piccolo. I like him for a lot of the same reasons I like Frieza, merciless, brutal, ect. He fits the villain role perfectly in my opinion, he was just ruethless and would do anything to win (hold Tien hostage) Plus, seeing Piccolo kill Shenron may just have been he most shocking moment in the whole series. This guy made my favorite series out of the 3 even more amazing than I thought possible

5.) Zangya - Easily the coolest lady in the Dragon Ball series for me. Though she didn't appear for much of the series, I found my self loving her every time I saw her. I loved her attitude, and..just how badass she was. Sadly, she suffered one of the most confusing, ad strange deaths I've ever seen, and still to this day I don't understand Bojack's strategy/plan there....Oh well, also, I'm a HUGE fan of pirates which is another reason I love Zangya and the Galaxy Soldiers.

6.) Cui - Cui was a very interesting character. To begin, I think he has one of the coolest character designs in all of

, as I believe most of rieza's henchmen do. I always loved how Cui would resort to anything to win. (Example: Ah! Lord Frieza!) Though Cui's time in the series didn't last too long, he was awesome pretty much any second he got screen time to me.

character. From the very beginning he was a funny, strong, and crazy character. Haha, he also always made you laugh, and every anime needs a dirty pervert, right? Master Roshi also had a fighting style I thought was very cool, very slick, and had some awesome techniques. Roshi was the first to train Goku, and start him on his path to becoming an excellent warrior/savior of the Earth. Also, I love everything about his funny little house, and the crazy animals scattered around his funny little island.

8.) Nail - Naaaaaaaaaaaaaaaaaaaaaaail! Certainly a close second for favorite Namekian, Nail is one of the greatest characters ever. HE had a very bold, and badass personality. I loved how Nail would give anything to protect his father, Guru. Another character that wasn't around for long, and totally deserved some more screen time!! Nail was so brave it was crazy! I also loved his kind of "I will fight to bring peace" attitude, it reminded me a lot of Future Gohan, another character I really love! ^_^

1rst avatar, lasted a couple of hours, I still really like it a lot, Guldo looks awesome. I just found one I think to be much better.

2nd avatar, almost a day, I love it, very cool shot of Frieza

3rd avatar, still going, a requested shot I gave to DBS, and the man filled in my request perfectly.
Add a photo to this gallery

Retrieved from "https://dragonball.fandom.com/wiki/User:Kikoho-sama?oldid=1025090"
Community content is available under CC-BY-SA unless otherwise noted.