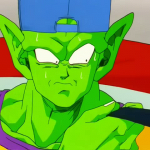 2,664 Edits since joining this wiki
December 20, 2011
0 Discussion posts
Hello, whoever you happen to be, I'm Freeza Burn. You can call me Burn, Burner, Jon, or pretty much whatever, I'm not too picky. I'm a fan of Dragon Ball (why else would I be here? :P), and in real life I recently finished graduate school (in mathematics). At 23 I'm pretty much the old man on here, but I feel like you can never be too old to enjoy DB (or most anything, really). I'm a member of the Manga Force, and the manga section of the wiki has improved by leaps and bounds from what I remember when I first came on here.

Aside from DB and mathematics, my other interests include physics (was a math/physics double major as an undergrad), playing violin and guitar, and doing karate, the last few of which I somewhat neglected in college. I spend most of my leisure time playing video games, hanging out with friends, and reading. I work as a content developer for math textbooks; it pays weIl and is close to home, but I can't see myself still doing it once my loans are paid in a year or so. I'm a pretty goofy (and occasionally sarcastic) guy, so if you're ever unsure if I'm joking about something, it's pretty safe to assume that I am. In case this hasn't satiated your unending desire to learn about me, here's my Facebook (or just feel free to ask!)

I also now have my own Dragon Ball Z Abridged episode!

and far too many others

I quickly seem to be getting restless with my avatars. Here are some I've had in the past:

Retrieved from "https://dragonball.fandom.com/wiki/User:Freeza_Burn?oldid=1212882"
Community content is available under CC-BY-SA unless otherwise noted.