Like the regular Supernova, the user raises his index finger and gathers energy in the form of a giant yellow-orange, sun-looking energy sphere. Once it is ready, the user launches the attack at the target.

In the spin-off manga Dragon Ball Heroes: Victory Mission, Froze has his Meta-Cooler Core fighter fire the Ultranova to defeat Rezok, which frees him from Haze Shenron's possession. 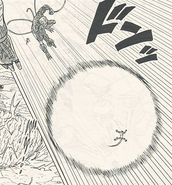 The attack hits Rezok in Victory Mission
Add a photo to this gallery
Retrieved from "https://dragonball.fandom.com/wiki/Ultranova?oldid=1924096"
Community content is available under CC-BY-SA unless otherwise noted.