Ultra Pinich (マキシピニッジ, Makishi Pinijji) is the result of Frieza and Cell tricking Pinich, Wanta and Paprika into fusing with them.

Due to Frieza and Cell having control over the fusion, Ultra Pinich possesses their evil personalities and voices.

However, as he takes damage, Pinich (presumably assisted by Wanta and Paprika) is able to slowly take control of the fusion.

Ultra Pinich is formed from the fusion of Pinich, Wanta, Paprika, Frieza and Cell after the last two join Pinich's team, lying about them having reformed. After Pinich's team loses against Tekka's in the Timespace Tournament, Frieza and Cell push Pinich into performing Ultra Fusion (taught to Frieza by Captain Ginyu), as it'd mean showing his full strength to Tekka. However, this was all part of their plan, and they took control over the newly formed Ultra Pinich, as well as destroying the Tournament Arena, killing Super Saiyan Blue Goku who tried to stop them, although this was quickly undone by Whis due to his time-rewind. Ultra Pinich escaped from the Tournament Arena, breaking through space-time and arriving at the real Earth with the intentions of destroying it and breaking free from Pinich's influence.

After arriving on the seventh level of the fused world utilizing their own Ultra Fusion to break through timespace, Tekka and his team face Ultra Pinich, alongside clones of Frieza and Cell. While Tekka wins the fight, Ultra Pinich merely recovers from the damage due to Piccolo's cells, though their Ki is lowered. Due to that, they proceed to create a Power Ball to turn themselves into a Golden Great Ape, claiming it was meant for Beerus.

Tekka and his team proceed to fight Great Ape Pinich, and during the fight, Pinich gains control over himself for his final battle with Tekka. Tekka's team is, once again, victorious. As Ultra Pinich falls into the timespace hole, the Ultra Fusion ends. Tekka himself jumps in after them to save Pinich.

As he is a Super Saiyan who possesses a tail and the ability to use the Power Ball technique, Ultra Pinich is capable of transforming into a Golden Great Ape form referred to as "Great Ape Pinich". This form is very powerful and Ultra Pinich planned to save it for fighting Beerus. While this form is at first in full control of Frieza and Cell as the original Ultra Pinich form was, turning into a Great Ape awakened Pinich's Saiyan powers, ultimately leading to him taking control over the Ultra Fusion.

As his Super Saiyan form is always active, presumably he is unable to transform into a normal Great Ape. 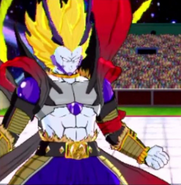 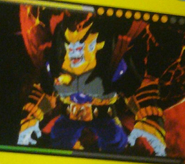