Ultra Ego (の, Wagamama no Gokui, lit. "The Secret of the Self-indulgent") is a highly advanced battle technique, primarily used by Gods of Destruction. It can also be manifested through the Ultra Ego transformation by those who are trained in the ways of Destroyers.

This power is attained by one who has received God of Destruction training and has gained the ability to use the powers of one. However, the state can only be utilized when the user is in the right mindset to act as a Destroyer.

It is the opposite of Autonomous Ultra Instinct. While the latter ability enables its users to act without thinking and only activates when one's heart is calm and when they get rid of unnecessary emotions, Ultra Ego instead fuels itself with the users' passion and overwhelming emotions, becoming stronger as they do as they please. Since Gods of Destruction are the primary users of this state, they indulge in their destructive role and tendencies, become more bloodthirsty and ferocious than before. Vegeta, a battle loving Saiyan, felt much like his old self (ex. Saiyan Saga, Majin Vegeta) when using the form, diving deeper into his Saiyan instincts and enjoying taking direct blows from his opponents to become even stronger (similar to via his Saiyan Power). This is in direct contrast to Ultra Instinct, the nature of which is to evade opponents' attacks in order to prevent its users from taking damage as much as possible. Ultra Ego is about moving your body freely, versus how Ultra Instinct is about your body moving freely.[2]

While Ultra Ego is a powerful ability, those who have not mastered it can suffer from various limitations. For instance, Vegeta was only able to grow stronger from deliberately taking hits, and though his battle lust only furthered this growth, it left him open to a great amount of unnecessary damage. During his fight with Granolah, this double-edged sword limited Vegeta's battle time, as he was forced to either take more hits and grow stronger at the severe risk of blacking out or begin avoiding attacks to maintain his stamina at the cost of accumulating strength.

When Ultra Ego is in use, the user becomes exponentially more powerful than before. Vegeta names the technique Ultra Ego in contrast to Ultra Instinct, which draws upon the principles of conquering oneself, while Ultra Ego seems to draw upon a severe level of self-indulgence in battle. Whereas Ultra Instinct allows a user's ability to anticipate, dodge, and counterattack to increase sharply in efficiency and power as he continues to fight an equally or even more powerful opponent, Ultra Ego allows the user greater overall strength when their lust for battle increases, and they take more damage. This is displayed by Vegeta's deeper dive into his Saiyan instincts. The user must be careful not to let their battle lust take complete control, as though it may raise their strength to astounding levels, it can leave them open to unnecessary levels of damage.

In the Granolah the Survivor Saga, Beerus displays Ultra Ego against Vegeta to show that there is another path to power separate from Ultra Instinct, first by using Hakai to destroy a decorative planet - releasing an immense amount of energy - and then going on to defeat Super Saiyan God SS Evolved Vegeta with ease.

Vegeta first attains Ultra Ego through the Ultra Ego transformation against Granolah after his Super Saiyan God SS Evolved is overwhelmed by the Cerealian. The transformation was powerful enough to cause Granolah to stumble back in noticeable fright. While fighting Granolah, Vegeta initially overwhelms him in strength, but as the fight goes on, Vegeta, somewhat lost in the thrill of the fight allows himself to take more and more attacks to push himself further. After a while, Vegeta realizes that he's taken too much damage and attempts to defeat Granolah with a large ball of power of destruction. However, Granolah manages to counter the attack after mutating his left eye and Vegeta fell to the ground by the impact. Vegeta quickly transforms back into base form during the fight, but then after Goku steps in for a short while, Vegeta is quickly able to return back into Ultra Ego. 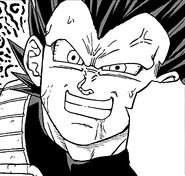