Dragon Ball Wiki
Register
Don't have an account?
Sign In
Advertisement
in: Characters, Characters who can fly, Males,
and 3 more
English

Another version resembles an adult version of Basaku the Saiyan Berserker from Dragon Ball Heroes, wearing an outfit that resembles the one worn by Broly.

Main article: Dragon Ball Z: Ultimate Tenkaichi The hero is on a journey to train in order to change the world from its current chaotic state. He first meets Captain Ginyu, who has been revived by the chaos and introduces himself as leader of the Ginyu Force. Ginyu asks the hero if he wants to join the force, with the hero responding that he would only join if he became the leader. The hero and Ginyu fight, with the hero as the victor, Ginyu gives him the position of leader but he declines, just before the hero leaves Ginyu gives him a Dragon Ball to aid him on his quest.

The hero travels to a city in search of a pair who are also searching for the Dragon Balls, he meets the pair who turn out to be Androids 17 and 18; the two have become similar to their future counterparts due to the chaos and have found two Dragon Balls with their Dragon Radar. The hero defeats them, restoring them to their normal selves and is given their Dragon Ball and Dragon Radar. Soon, The hero finds and battles against a Great Ape in a wasteland and manages to defeat it.

The hero continues searching for the Dragon Balls and comes across a lead as to who may have caused the chaos, The reincarnation of the demon king Piccolo. The hero confronts Piccolo at the Glacier, the hero wonders why Piccolo was considered a good guy and attacks him, with Piccolo stating that the hero surely has a death wish. The hero defeats Piccolo, who reveals that he was acting evil in order to train the hero. Piccolo was also looking for the one responsible, and reveals that someone found the Dragon Balls and wished to Ultimate Shenron for the earth to become a living hell; explaining the appearance of Ginyu and the Great Ape, and the changed attitudes of the Androids. Piccolo had almost found out who the villain was, but was attacked by a Great Ape sent out by the villain before he was able to ascertain their identity. Piccolo compares the hero to past heroes Goku and Gohan and then trains the hero, who had gained the ability to become a Super Saiyan during their battle.

The hero heads to the location of the Great Ape who defeated Piccolo. The ape is revealed to be Baby in his Golden Great Ape form, the hero asks who it was who caused the world to become a living Hell, but Baby attacks him. The hero defeats Baby, who reveals that it was Omega Shenron who turned the world to chaos (or "paradise" as Baby calls it) before collapsing.

The hero discovers the location of three Dragon Balls, and deduces that this must be where Omega Shenron is. He finds Omega Shenron and the two have a brief discussion before engaging in combat. The hero fights well but is unable to defeat Omega Shenron, who steals his Dragon Balls and scatters them. The hero heads out an collects all of them again, along the way fighting Saibaman, Dodoria, Zarbon, Recoome, Burter, and Jeice. He goes to the World tournament stage where numerous villains (including Cell, Frieza, Jeice, Ginyu, and Raditz), and his mentor Piccolo, along with the revived Android 16 have entered.

The only missing Dragon Ball is the Four-Star Ball, which the hero finds it at the Cell Games Arena, where it is in the hands of Omega Shenron. The hero defeats and destroys the evil dragon, but not before he states that it is way too late for the world to be saved.

The hero summons Ultimate Shenron at The Lookout. He asks the dragon to hear his wish, but then realizes that Ultimate Shenron is controlled by an evil power. He barely defeats the dragon, restoring him to normal. He asks for the world to be restored to the way it was before, but Ultimate Shenron reveals he cannot grant the wish as the chaos far exceeds the power of Ultimate Shenron's creator, the hero finally realizing what Omega Shenron's last words had meant. The hero instead asks for all those killed in the chaos to be brought back. The hero then announces that if he can't fix the world with the Dragon Balls, he will fix it with his own two hands, Ultimate Shenron understands and leaves, with the hero setting off to continue his journey for a better world.

The hero is very powerful, with his base form's power being above that of Ginyu, Androids 17 and 18, and the Super Namekian Piccolo. In his Super Saiyan form he is able to defeat Golden Great Ape Baby - who in turn has similar strength to Super Saiyan 4 Goku. Upon finishing his training and second collection of the Dragon Balls, the hero's power becomes so great that he is able to defeat Omega Shenron.

The hero is able to use many techniques used by characters across the series.

The hero gains the ability to become a Super Saiyan after his training with Piccolo. He uses the power up during his battles with Baby, Omega Shenron, and Ultimate Shenron. 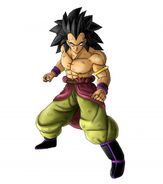 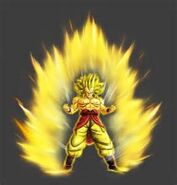