A single punch with the back of the user's fist used to stun an opponent.

It used by Gohan in the beginning of his battle with Super Buu, and is effective in giving Gohan a chance to attack.

Ultimate Knuckle was named in Dragon Ball Z: Battle of Z, where it is one of Ultimate Gohan's special attacks. 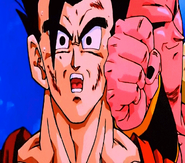 Ultimate Knuckle in Battle of Z
Add a photo to this gallery
Retrieved from "https://dragonball.fandom.com/wiki/Ultimate_Knuckle?oldid=1899566"
Community content is available under CC-BY-SA unless otherwise noted.