"Trunks The History - The Lone Warrior" (   －たったひとりの戦士－, Torankusu za Sutōrī -Tatta Hitori no Senshi-, lit. "Trunks the Story –A Lone Warrior–") is a special side-story manga chapter first published in 1992, and featured in the Dragon Ball manga in the thirty-third volume, The Cell Game. The special was adapted into the special movie Dragon Ball Z: The History of Trunks in 1993; however, much more content was added in the anime movie.

Differences from the anime adaptationEdit 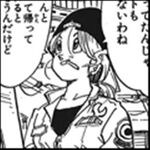 Future Bulma
Add a photo to this gallery

Retrieved from "https://dragonball.fandom.com/wiki/Trunks_The_History_-_The_Lone_Warrior?oldid=1908843"
Community content is available under CC-BY-SA unless otherwise noted.