Dragon Ball Wiki
Register
Don't have an account?
Sign In
Advertisement
in: Characters, DBS Characters, Characters who can fly,
and 4 more
English

"The Evolution of Planet Cereal"

Toronbo has axolotl-like features, causing him to share an appearance theme with the amphibian-like Sugarians. Apart from that, Toronbo has fully colored red eyes, light ocean blue skin with thin spikes starting from its head all the way to its tail. It also has thin spikes hanging from the back of its jaws all the way to the corners of its forehead, These thin spikes have tiny hair on each of them.

Similar to other Eternal Dragons, Toronbo is a neutral figure who will grant the wish of anyone who summons him regardless of the nature of their wish. Toronbo is very courteous, polite and patient, giving advice to the summoner on the impracticality of their wish or offering alternative wishes that would best suit the summoner's needs.

Toronbo was created by the Namekians who lived on Cereal over 500 years ago. The dragon was only to be summoned in a ritual to celebrate Namekian warriors who are deemed brave. It was not to be used to grant wishes for selfish desires.

The Cereal Namekian Elder Monaito is the Dragon Clansman currently tied to Toronbo. At one point, forty years prior to the present. Monaito summons Toronbo in the midst of the battle between Bardock and Gas and asks the dragon to send Bardock back to his home planet. When Bardock refuses and voices his desire for another wish to be made, Monaito instead asks Toronbo to allow both of Bardock's sons to thrive.

Main article: Granolah the Survivor Saga Forty years after the disappearance of the Cerealian Two Star Dragon Ball, a Sugarian boy discovers the ball while searching for insects. The Sugarians take the ball to study its origins. Granolah, having watched the news of its discovery, disguises himself and steals the Dragon Ball. With the two Dragon Balls gathered, he summons Toronbo. As the dragon asks Granolah to state his wish, the surviving Cerealian wishes to become the strongest warrior in the universe.

Toronbo repeats Granolah's wish to become the strongest warrior in the universe apart from the gods. Toronbo reveals he can make Granolah stronger than he already is, but he's unable to increase his power beyond his latent potential. Granolah laments that his dream is beyond his reach, but Toronbo reveals there is another way so long as he agrees to a certain condition, though exclaims that it is Granolah's decision. Toronbo explains that he's able to multiply Granolah's current strength by condensing all the power he could've accumulated in his lifetime, at the cost of shortening his lifespan to only three more years. Granolah accepts Toronbo's offer, and the wish is made, causing Toronbo to disappear and the Dragon Balls to scatter.

After successfully gathering the Cerealian Dragon Balls, Elec summons Toronbo and is amazed to see an actual dragon before he wishes for his brother Gas to become the strongest warrior in the universe. 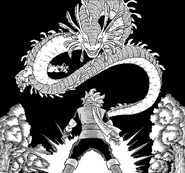