To Win By a Tail

"To Win By a Tail" (悟空のシッポ, Gokū no Shippo, lit. "Goku’s Tail") is the one hundred seventh chapter of the Dragon Ball manga.

The cover of this chapter shows a fighter jumping into the air. Goku is seen in the position to do the Kamehameha.

Meanwhile, Emperor Pilaf, who is watching the battle from a screen, overhears that Goku's weakness is his tail and is overjoyed. He reveals that he has one of the seven Dragon Balls in a special case which supposedly cloaks it on the Dragon Radar, preventing Goku from gathering all seven. Pilaf, Shu, and Mai then leave to seek out Goku and steal what Dragon Balls he has.

Goku refuses to surrender, and Roshi reveals that the masked fighter is actually Gohan, the late adoptive grandfather of Goku. As Grandpa Gohan swings Goku around by the tail and slamming him into the ground, Goku's tail rips off. 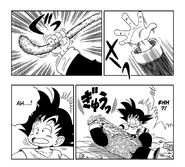 Retrieved from "https://dragonball.fandom.com/wiki/To_Win_By_a_Tail?oldid=1873229"
Community content is available under CC-BY-SA unless otherwise noted.