Time Freeze (タイムストップ, Taimu Sutoppu) is the special ability to temporarily stop time, which allows the user to escape an opponent and hide when they find themselves losing a fight.

Guldo puts his hands out and inhales a lot of air. Then, he yells "Time Freeze!" and time stops. In the anime Guldo needs to hold his breath to stop time, and so quickly closes his mouth to hold his breath, and after this, time will temporarily stop for as long as Guldo can continue to hold his breath. In the manga he just stops it temporarily, which uses up a lot of energy - leaving him unable to attack while freezing time. When Hit uses the technique he faces his palm at the opponent and freezes them in time, when Chronoa uses Freeze she points both hands at her foe and stops their bodies' time, freezing them in place.

While time is stopped Guldo can either run and hide or attack, however Guldo can not hold his breath for very long, which means that he can only stop time for a very short time, while it also uses up a lot of his energy; so repeatedly using it can wear him down very quickly. During his fight with Gohan and Krillin, it is shown that if he uses the move three times, it will completely drain him of energy to the point that he can not even fire simple Ki Blasts. He implies that his rapid energy drain was due to choosing a chili cookoff over a diet and exercise program. It is unknown if he can continue to use the move after he has been drained, but it is known that he can not use any other moves until he recovers.

In Dragon Ball Xenoverse 2, it is revealed by Guldo that the user continues to age even while time is stopped (presumably because time does not stop for the user as they can move while stopping time).

Guldo used this technique against Gohan and Krillin.

In the Dragon Ball Super anime, Hit manages to attain usage of the Time Freezing ability by improving his Time-Skip ability, and is able to freeze Super Saiyan Blue Kaio-ken Goku in place by touching him mid Time-Skip in order to avoid his match finishing punch.

In Jaco the Galactic Patrolman, the Time Machine built by Tokunoshin Omori is unable to travel through time but has the ability to temporarily freeze time. It is the only known Time Machine capable of freezing time.

In Super Dragon Ball Heroes: Dark Demon Realm Mission!, Chronoa uses her Freeze ability to stop Mira from being able to move, however he eventually manages to break free of the time freeze by powering up into Super Mira. Later, Chronoa uses Freeze on Demon God Gravy in order to rescue Trunks: Xeno and Vegeta: Xeno. Like Hit, Chronoa's ability to Freeze time does not require her to hold breath. Her ability to freeze time is likely tied to her position as the Supreme Kai of Time who governs time and space.

Guldo can use this technique in the Raging Blast series.

Time Freeze appears under the name Time Control in Dragon Ball Xenoverse. Referred to as telekinesis in the description, it is a chargeable technique that allows the user to take a deep breath and freeze their opponent. The longer the technique is charged — thus the deeper they breath — the longer they remain frozen. This skill can be obtained by the Future Warrior in Parallel Quest 18: "Return of Ginyu Force!".

In Dragon Ball Xenoverse 2, Time Control returns as one of Guldo's Super Skills which can be obtained by the Future Warrior in Parallel Quest 18: "Force Entrance Exam".

If the Future Warrior talks to Guldo on Frieza's Spaceship, Guldo reveals that he dislikes using his ability to stop time as he continues to age even while time is stopped. Guldo also threatens to stop time and search the Warrior when the candy he got from Captain Ginyu goes missing.

In Super Dragon Ball Heroes: World Mission, Freeze is a CAA Ability of certain cards which acts as a counter attack where Chronoa appears to assist the character by freezing the attacking opponent in time allowing the character to perform a rush attack (50 Hits maximum) on the helpless opponent ending the attack with a strong punch, before the target is unfrozen in time causing them to receive the damage from the rush attack while time was stopped all at once. One of the Hero Lab Robots Lulu's Puzzle Missions allows the player to unlock a CAA Ability accessory that gives the equipped card the Freeze CAA ability. It should be noted that the Freeze CAA ability has several variations that differ in name and additional support effects.

Gudlo during his Time Freeze technique

Guldo running out of breath 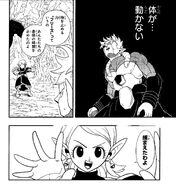 Chronoa about to freezes the time on Broly in Push Forward to the Battlefield! Dragon Ball Heroes
Add a photo to this gallery

Retrieved from "https://dragonball.fandom.com/wiki/Time_Freeze?oldid=1935632"
Community content is available under CC-BY-SA unless otherwise noted.