The user creates a spherical space of magical energy around the opponent restraining and damaging the opponent, but leaves the user vulnerable to attack.

Time Bullet first appeared in Dragon Ball Xenoverse as part of the GT Pack 2 DLC. It is one of Towa's Super Skills and can be obtained by the Future Warrior as a reward in the DLC Parallel Quest event: "Insidious Plot".

In Dragon Ball Xenoverse 2, Time Bullet returns as a Super Skill which can be obtained by the Future Warrior by purchasing it from the Skill Shop after defeating Kid Buu in the main story.

As part of the Extra Pack 2 DLC, Dabura uses a stronger longer lasting version of the technique during the Infinite History Saga. After kidnapping Chronoa and taking her to the Crack of Time, he uses Time Bullet to imprison her and notes she will eventually die unless he is defeated. Chronoa is unable to break free and she remains trapped until the Future Warrior and their partner defeat Dabura. Besides its power, duration, and Dabura's ability to fight while the target remains imprisoned, it is identical to Towa's Time Bullet and is presumably stronger thanks to Dabura having empowered himself will large amounts of Damage Energy. 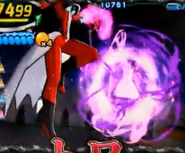 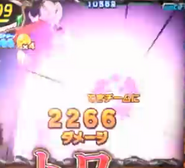 The attack's effect
Add a photo to this gallery

Retrieved from "https://dragonball.fandom.com/wiki/Time_Bullet?oldid=1910638"
Community content is available under CC-BY-SA unless otherwise noted.