The Hopes of a Planet

Monkey in the Moon

"The Worn-Out Warriors" (ボロボロの戦士たち, Boroboro no Senshi-tachi) is the forty fifth chapter of Dragon Ball Z and the two hundred thirty-ninth overall chapter of the Dragon Ball manga.

The cover of this issue shows Vegeta with destroyed armor, wounded from the battle.

Vegeta is shown to be angry at the fact that while he has been hurt physically, his pride has been hurt worse for the fact that he struggled with low-level warriors. He releases some of his remaining power, but all the warriors are shown to be alive. As Vegeta heads toward Gohan to finish him off, he remarks that Gohan's tail has grown back. He decides to immediately pull the tail off, however, Yajirobe intervenes and manages to cut Vegeta in the back, slightly injuring him. Vegeta gets back up and rapidly kicks Yajirobe into rocks. Just as he heads back to Gohan to prevent him from transforming into a Great Ape, Gohan looks at the sky and starts to transform. 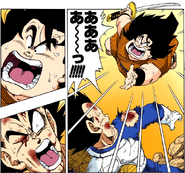 Yajirobe attacks Vegeta from behind

Yajirobe is hit by Vegeta
Add a photo to this gallery

Retrieved from "https://dragonball.fandom.com/wiki/The_Worn-Out_Warriors?oldid=1873429"
Community content is available under CC-BY-SA unless otherwise noted.