The End of Vegeta

Clash of the Super Powers

Filled with rage at the deaths of Vegeta, Dende, and countless others on Namek and across the galaxy, Goku finally begins his long-awaited battle with Frieza and it seems that the two are evenly matched, with Frieza even admitting that he is the strongest Saiyan by far. King Kai, having sensed Vegeta's death from his own planet, sadly reminisces about the truth of Vegeta's tragic history, much to the surprise of Yamcha, Tien Shinhan and Chiaotzu. King Kai reveals that Goku might just have a chance and that if anyone could take down the evil tyrant, it would be Goku.

Goku continues to surprise Frieza with his ability to keep up with him with minimum effort. The battle starts to escalate, with parts of Namek being demolished by the energy blasts in the process. Elsewhere, while wandering across Namek, Bulma finds herself surrounded by curious Namekian Frogs, one of which jumps onto her head, frightening her.

Meanwhile, Goku and Frieza match blow for blow, and Piccolo, Gohan and Krillin have trouble just watching them. Once it becomes obvious to Frieza that he cannot defeat Goku easily, he creates a lava crater in the planet's surface and submerges Goku in a lava tsunami. Goku protects himself with an energy shield, but Frieza surprises him and hits him into the crater where he vanishes from sight. Piccolo confronts Frieza and prepares to fight him again when Goku re-emerges, having just barely clung onto a ledge in the crater. The magma becomes unstable, erupting like a volcano, so Goku uses his energy to force it back down and covers the surface with rocks to ensure it does not come back again.

Goku demands that Frieza leave Namek out of their fight, but Frieza, while agreeing, quips that Goku's compassion will be his downfall. Goku scoffs this and prepares for the second round. 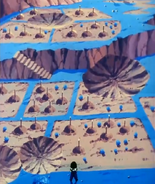 Frieza and Goku facing off

Retrieved from "https://dragonball.fandom.com/wiki/The_Ultimate_Battle?oldid=1064673"
Community content is available under CC-BY-SA unless otherwise noted.