The Time Draws Near

The Time Draws Near

The Cornered Mouse Bites the Cat

Back From the Other Side

The Death of a God!!
"The Time Draws Near" (、をむ, Kyūso Neko o Kamu, lit. "The Cornered Mouse Bites the Cat") is the twenty seventh chapter of Dragon Ball Z and the two hundred twenty-first overall chapter of the Dragon Ball manga.

The cover of this chapter shows various different scenes of the Saiyan attack. Vegeta is shown smiling, Goku is rushing towards the battle field on the Flying Nimbus, Gohan is shown with a scared look on his face, Krillin is shown holding the Destructo Disc and Nappa is shown with a cut on his cheek.

Nappa now has his eye on Gohan, who is standing right in front of him, and tells him that since he’s part Saiyan, he needs to make it fun. He kicks Gohan into the air, and then swats him into a nearby mountain. Gohan struggles back to his feet, coughing up blood, as Nappa comes at him. But Kuririn then jumps in and kicks Nappa in the face, and punches him off into the distance. Kuririn flies after Nappa, and Nappa catches himself and flies back toward Kuririn. Nappa punches at Kuririn, but Kuririn does a few back flips to get out of the way. Nappa rushes at him again, and so Kuririn puts his right hand into the air, palm up, and forms a Destructo Disc above his hand. He announces the Kienzan, and then launches it toward Nappa. Nappa stands to take it head on, but Vegeta yells to get out of the way. Nappa just barely moves aside, and the Kienzan slices through a mountain like a saw blade. It did graze Nappa’s cheek, leaving a nasty little cut.

Nappa’s pissed now, and throws a blast at Kuririn. Kuririn jumps up out of the way, but is hit by the shockwave. Nappa prepares to finish him off, when Piccolo suddenly blasts him in the back, leaving a nice burn mark. Vegeta laughs at Nappa and thinks they’re too much for him, and then Piccolo suddenly feels an unbelievable ki. Nappa thinks they’re talking about him, but Piccolo says it’s Son Goku!

Nappa, angry that his face has been cut 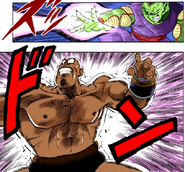 Piccolo fires a Ki blast at Nappa's back