The Young Man of Mystery

The cover shows Future Trunks standing in the Northern Wastelands while in his base form.

Having sliced Frieza in half vertically, Future Trunks proceeds to vivisect the tyrant before destroying his pieces with a ki blast. King Cold is shocked, as are the Dragon Team. The Z Fighters fly off to the scene of the battle, and Future Trunks lands to face King Cold. King Cold tells Future Trunks that his feat was impressive, and offers him a spot in the Frieza Force. Future Trunks immediately declines, and King Cold then asks to see his sword. After a momentary hesitation, Future Trunks tosses him the sword, which Cold says has a fine edge. Believing that the sword was what allowed Future Trunks to beat Frieza, Cold attacks with the sword. However, Future Trunks easily grabs the sword by its blade, then hits Cold in the chest with a God Breaker.

Cold is sent flying backwards into a rock formation, and the stunned Z Fighters stop in midair. Future Trunks finishes the tyrant with another ki blast. He then destroys King Cold's Spaceship with another blast, sheathes his sword, and reverts to his base form. Seeing the Z Fighters floating nearby, he tells them that he is going to greet Goku. He asks if they want to join him, and points to where Goku will be. Gohan wonders how he knows his father, while Vegeta angrily thinks that there are no others Saiyans.

Mecha Frieza cut in half in front of King Cold 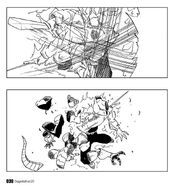 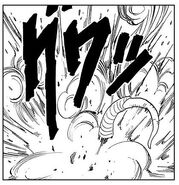 Retrieved from "https://dragonball.fandom.com/wiki/The_Second_Super_Saiyan?oldid=1922147"
Community content is available under CC-BY-SA unless otherwise noted.