The Rage of Beerus

The Rage of Beerus

Battle of Gods
"The Rage of Beerus" (ビルスのり, Birusu no Ikari, lit. "Beerus' Wrath") is the third chapter of the Dragon Ball Super manga.

On King Kai's Planet, Goku is in pain after battling with Beerus. King Kai tells Goku that he warned him about fighting Beerus and Goku agrees. Goku is aware that Beerus is heading to Earth and Bulma is having her birthday party. 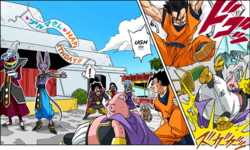 On Earth, a battle broke out between Beerus, Gohan, and Majin Buu. Majin Buu and Gohan have been blasted by a single kiai from Beerus, taking them out. Beerus tells them that he only went to Earth to ask about the Super Saiyan God but was given a rude introduction. Goten and Trunks fuse into Gotenks and challenges Beerus. With Beerus explaining that he wanted to try pudding, Gotenks replied back by saying that Majin Buu ate it and they have no control over it. Gotenks then transforms into Super Saiyan 3 and charges Beerus, only being grabbed by the arm and thrown into the ocean.

Piccolo gets angry and attempts to use his Special Beam Cannon but Vegeta told him not to because fighting him would be pointless. Beerus starts remembering who Vegeta was, meeting him on Planet Vegeta while he was a child. A flashback to Planet Vegeta: Vegeta is seeing his father, King Vegeta, being stepped over the God of Destruction Beerus, frightening Vegeta. Back to present time, Vegeta tells Dende and Piccolo that he is the strongest god there is. Bulma walks over to Beerus and slaps him for causing a commotion during her party. Everyone at the party is scared and as a result, Beerus slaps Bulma, enraging Vegeta.

Seeing Bulma get slapped caused Vegeta to receive a rage boost in his Super Saiyan 2 form. Vegeta charges at Beerus only to be punched. However, Vegeta didn't back down, getting several hits on Beerus going to from ship to the water, then being blasted in the air. Krillin realizes that Vegeta has gotten stronger and wonders how. Beerus is unhurt by Vegeta's blast and attempts to blow up the Earth but Goku arrives by the use of Instant Transmission and asks for time.

Meanwhile, on the Sacred World of the Kai, Kibito Kai and Old Kai are watching the fight between Vegeta and Beerus through a crystal ball. Old Kai is troubled and notices a force destroying planets even though Beerus is on Earth. Old Kai creates another crystal ball and sees Champa and Vados wondering space talking about "huge wish orbs." Champa and his attendant notices Old Kai and Kibito Kai spying and immediately goes to their planet. While asked about what they heard, Kibito Kai and Old Kai deny hearing anything. Champa and his attendant, unconvinced by their lies, leave anyway. Old Kai thinks they could be after the Namekian Dragon Balls and has Kibito Kai hurry to Planet Namek to protect them.