Goku, Hurry!
"The Last Blast" (の, Saigo no Kikōhō, lit. "The Final Kikōhō") is the twenty forth chapter of Dragon Ball Z and the two hundred eighteenth overall chapter of the Dragon Ball manga.

This chapter cover features four photos of the main characters. One photo is a picture of the Son family with Ox-King, Chi-Chi, Goku, and Gohan together. The next is Tien Shinhan, Chaozu, Yajirobe, Krillin, Mr. Popo, and Yamucha during their training on The Lookout. The bottom photo shows Launch, Bulma, Puar, Turtle, and Master Roshi at Kame House. The final photo is mostly covered up by the other photos, but Piccolo's face can be seen in a part of the photo that is showing.

Following Chiaotzu's heroic yet ultimately futile attempt to kill Nappa via Self Destruction, Goku is still traveling down Snake Way. As he finds jumping along the path is taking too long as three hours have gone by, he decides to fly at high speed. Meanwhile, as the remaining Dragon Team confront Nappa, who decides he'll take out Tien first and then Krillin. Tien mourning Chiaotzu's sacrifice, tells Nappa he will pay. Piccolo tells Krillin and Gohan that Nappa is open to attack in the instant he attacks, so they will use that instant to launch a coordinated attack. However Vegeta overhears them and instead of warning Nappa, sarcastically notes its a good plan and hopes it works, even telling Piccolo to focus on Nappa or they'll lose their instant to attack. Piccolo notes how confident Vegeta is and hopes to see Vegeta's face when Goku arrives, causing Vegeta to ask who Goku is and if he's their secret weapon, failing to realize that Piccolo is referring to Raditz's younger brother. Nappa charges towards Tien who begins focusing energy using his remaining arm. Piccolo and Krillin use Rapid Movement and launch a combined rush attack, with Piccolo hitting Nappa hard in the face, followed up by Krillin performing a Double Axe Handle. The two turn their attention to Gohan, expecting him to fire an attack at Nappa, unfortunately the inexperienced boy freezes in fear after having witnessed the deaths of both Yamcha and Chiaotzu. Piccolo calls Gohan a coward (or "Damn You!") and Krillin decides they have no choice but to attack Nappa themselves, as Tien observes while gathering ki. Krillin fires a Kamehameha while Piccolo simultaneously fires a two-handed Special Beam Cannon. However Nappa dodges by ascending rapidly avoiding both energy waves, with Krillin noting their attacks were too late.

However Tien finishes charging the rest of his energy into his remaining hand and fire his Spirit Tri-Beam at Nappa, which blows off Nappa's Battle Armor, but fails to hurt him. Tien then falls to the ground and dies. Krillin screams out for Goku to save them, due to Nappa being too much for the heroes to handle. We then see Kami and Mr. Popo on the Lookout. Kami says he no longer senses Piccolo's presence, and that very soon Piccolo will die. We then return to the battlefield, where Krillin and Piccolo are still trying to come up with a plan. Piccolo suggests he fights better in the air, so Krillin and Piccolo jump to the ground. Nappa, who does not seem to be bothered by this at all, charges Krillin and Piccolo, but is stopped by Vegeta.

Vegeta ponders whether or not this Goku person they are waiting for is actually Kakarot (Goku's original Saiyan name). Krillin tells Vegeta it is Goku, and Vegeta taunts them. Krillin then states that Goku will be much stronger than last time. Amused by this, Vegeta decides waiting 3 hours to see if Goku will arrive. Nappa is displeased with this, and one again flies at the Dragon Team, ready to attack. Vegeta scolds Nappa for attempting to disobey him, and Nappa then stops and apologizes. Piccolo then notices form this, that if Nappa takes orders from Vegeta, Vegeta must be even stronger than he is. Nappa questions why Vegeta would like to wait for Goku, to which he responds traitors should be killed, and he wants to show them how terrible they can be.

Goku using Dragon Dash as he races to the battlefield 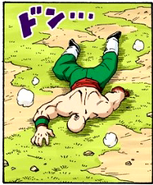