The chapter opens with Chun rushing Goku. However, the boy jumps into the air, evading his opponent. Chun gives chase, hitting the boy square in the back, which sends him flying out of the arena. As Chun is about to be declared the winner, Goku appears; he is using his tail as a propeller to fly. Upon his return to the ring, the two martial artists discuss using the Kamehameha, and Chun decides to show Goku that not just anyone can use the powerful technique. As Chun begins charging the blast, so does Goku, who fires his at exactly the same moment the hermit does. The blasts collide, sending both fighters back, although unharmed. As everyone stares in disbelief, Chun decides on his next move.

Goku uses his tail to fly 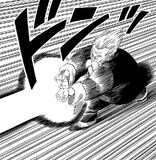 Retrieved from "https://dragonball.fandom.com/wiki/The_Kamehameha?oldid=1943595"
Community content is available under CC-BY-SA unless otherwise noted.