The cover of this chapter shows Goku and Gohan in the Hyperbolic Time Chamber.

While Vegeta is pummeled by Cell, Krillin asks Future Trunks why he didn't step in to help him. Future Trunks tells that he will help, but only after Vegeta is knocked out, telling he is stronger than his dad but does not want to show this to his father. Android 16 briefly tries to step in and help, but Cell warns him what will happen. Suddenly, Vegeta decides to try out a new attack, his Final Flash. Vegeta challenges Cell to take on the attack, and Cell accepts. Future Trunks immediately tries to convince his dad otherwise, but Vegeta still proceeds. Krillin realizing the power of the blast, yells at Trunks to get back . As the attack reaches Cell, he realizes too late its power. Vegeta manages to get it to only hit Cell and avoids blowing up the Earth, at the expense of not killing Cell. Vegeta is left confident of his abilities. 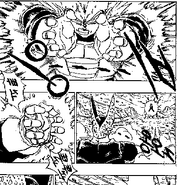 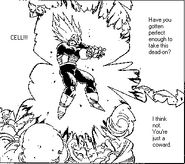 Vegeta challenges Cell to take on his Final Flash 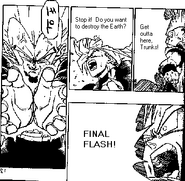