The Death of Vegeta

The Death of Vegeta

The cover shows an image of Vegeta standing in the foreground, and scene from the chapter featuring Vegeta lying on the ground dying with Goku looking down on him.

Having been mortally wounded by Frieza's Death Beam, Vegeta lies dying on the ground. Goku angrily tells Frieza that he did not have to kill Vegeta, but Frieza sarcastically replies that he killed Vegeta because he was repeating himself. Vegeta tells Goku that if he was more ruthless he could be a Super Saiyan, and attempts to tell Goku the legend. He manages to describe how Frieza destroyed the Saiyan homeworld, Planet Vegeta, because he feared a Super Saiyan. After finishing the story he dies, and a moved Goku begins to bury his fellow Saiyan.

As he buries Vegeta, Goku asks for some of his pride, noting that he is a Saiyan too. He then promises to defeat Frieza to avenge all the Saiyans and Namekians that he killed. Seeing that the battle is about to begin, Piccolo, Krillin, and Gohan leave in order to be out of the way. Goku charges at Frieza, who blocks his attack. The two attack each other briefly but are unable to connect. Goku leaps into the air, and Frieza attacks with Eye Lasers. Goku dodges and appears behind Frieza, but Frieza disappears and pops up out of the water behind him. Frieza unleashes a powerful Ki Blast which Goku manages to block, although it begins to push him backwards. The blast pushes him into a rock formation before he is able to deflect it upwards. Goku complains that it hurt, while Frieza is unamused. 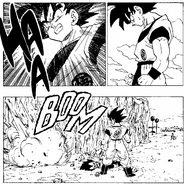