The Room Of Spirit And Time

The Cell Game (セルゲームまる, Seru Gēmu Hajimaru, lit. "The Cell Games Begin") is the thirty-third volume of the original Dragon Ball manga series. It is released in North America as Dragon Ball Z volume seventeen, with the chapter count restarting back to one. This volume shows the last part of Perfect Cell Saga and the beginning of the Cell Games Saga.

Now in his Perfect Form, Cell is stronger than any creature alive—even the muscled-out new form of the mighty Saiyans. Finding no competition on Earth, Cell invades a TV studio and gives the world an ultimatum: produce a fighter who can beat him in one-on-one combat, or he will methodically slaughter every living thing! But does the human race…or even the Saiyan race…have a champion who can go up against Cell? Plus the alternate-timeline story of Trunks' origin![1]

This section, or a part of it, has been transcluded from The Room Of Spirit And Time; any changes involving it should be made there instead. /

Son Goku was Earth's greatest hero, and the Dragon Balls—which can grant any wish—were Earth's greatest treasure. Three years ago, Earth was visited by Trunks, a time traveler from the future. Trunks warned Earth's martial artists that the world would soon be attacked by super-powerful androids. But even the androids didn't know they were only the advance guard for an even more terrifying enemy: Cell, a bioweapon who absorbed the hapless androids and mutated into the ultimate fighter!

Realizing they were no match for Cell in their current condition, the heroes trained in the Room of Spirit and Time, where one year passes for every day outside. After a "year" of time-accelerated training, Vegeta and Trunks challenge Cell![1]

"As many of you can imagine, doing a weekly manga serial is very hard work. I've been doing a weekly serial for 13 years straight and it's beginning to wear me down physically and mentally. I never considered myself to be the kind of guy who had a lot of grit and willpower. So, thinking of myself and my family, I'm starting to think of ways to take it easy."[1]

Info below is retrieved from Viz Media.[1]

Z Fighters at the Cell Games 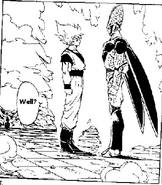