Telepathy (テレパシー, Terepashī[1]) is a technique used by several characters throughout the Dragon Ball series.

The ability to communicate telepathically does not seem to be hindered by time dilation, as Piccolo is able to talk to Goten and Trunks while they are in the Hyperbolic Time Chamber during the Fusion Saga, despite him being outside of it.

When Slug used it on Bulma, she seemed to become dazed and confused while he was searching her memories.

Mind reading notably has some difficulty being effectively used against people who have low intelligence. This is best demonstrated when Korin attempted to use his telepathy to read Maron's next moves in a Poker game, only to fail as "[Korin] has seen party balloons with more on their mind [than with Maron]."

Telepathy was first used in the series when Master Roshi reads the mind of Nam during the 21st World Martial Arts Tournament, thus learning of Nam's desperate search for water.

King Kai is possibly one of the most famous users of this technique, as he is able to speak with people all across the universe and countless people at one time, something the Supreme Kais thought was impossible. It can be assumed that he taught it to Goku while he trained with him in Other World, as Goku uses this to stop Krillin from finishing Vegeta after their battle on Earth. Goku also uses telepathy in order to read Krillin's mind to catch up on their experiences on Planet Namek. Guru can communicate telepathically with his Namekian offspring as well as others. He is also capable of reading a person's mind while drawing out their power.

Piccolo uses telepathy several times to communicate with Gohan. He also used to communicate Goten and Trunks, who were in the Hyperbolic Time Chamber during the Fusion Saga.

It was also used by Shin to read the mind of Piccolo while the two were facing each other at the 25th World Martial Arts Tournament.

Babidi can use telepathy via his magic, enabling him to speak to the entire Earth's populace. He can also project images into their minds by having them close their eyes, which he used to terrorize them by showing them Majin Buu massacring city by city.

Much later while being trapped inside Super Buu's body, Goku and Vegeta read the unconscious Good Buu's mind in order to know the backstory of Buu's separation into other Evil Buu and further conflicts.

Using his magic, Moro can force an opponent to relive a memory from their past - with Moro himself being able to see the memory as it unfolds.

The Para Brothers used it to communicate Luud's weakness to Goku, and coordinate a synchronized assault against the machine mutants.

Dr. Gero and Dr. Myuu used it to brainwash Android 17.

Pan used it to communicate with Goku underwater during their fight with Haze Shenron.

Later, Vegeta also telepathically communicated with Goku asking him to stop his self-explosion in order to kill Omega Shenron as the dragon would simply regenerate that would result Goku's sacrifice in vain. Shortly, Vegeta himself arrives at the battle scene.

In the Super Dragon Ball Heroes anime, Hearts uses his ability to read hearts on Hit to find out who the strongest in all 12 universes is. Hit is shocked when Hearts correctly guesses that Jiren is the strongest, and questions if Hearts read his mind. In the manga version he can also use his ability to give him an advantage on his opponents by reading their minds to foresee their attacks, this allowed him to easily counter Hit's use of timeskip. However, this technique is not infallible as Hit was later able to counter it by thinking of an attack before switching to another one while skipping time and during his battle with Gogeta, Hearts was unable to keep up with the blows sent to him by Gogeta despite foreseeing his attacks.

In Dragon Ball Z: Lord Slug, Lord Slug uses it on Bulma to find out more about the Dragon Balls.

In Dragon Ball Z: The Return of Cooler, Cooler's surviving head used it to communicate with Goku and Vegeta after they were brought to him inside the Big Gete Star following their defeat by his Meta-Coolers. He speaks normally when assuming his battle form, however.

It is implied that Goku was using telepathy to communicate with the other Z-Fighters when planning to have them donate their energy to Goku to empower him enough to stop the Legendary Super Saiyan Broly in Dragon Ball Z: Broly - The Legendary Super Saiyan, as he was communicating with them despite being far away from them, and in one scene, Goku's voice is heard with an echo effect. Unlike other instances, however, the characters lips move during these instances.

In Dragon Ball Xenoverse, Mira used it to communicate with Towa after he is reduced to just his core after the Future Warrior destroys his body with a Buster Cannon.

In Dragon Ball FighterZ, Piccolo uses it to read Bulma's mind from afar to learn about the situation while recovering aboard her ship being saved by Goku and Krillin. Krillin attributes his skill with the technique due to his fusion with Kami, stating that Kami was an old hat when it came to reading minds.[2]

In Dragon Ball Z: Kakarot, at certain points in the main story and during Intermissions, King Kai will at times contact the Dragon Team via telepathy and comment on what they are currently doing. Activities that can trigger his telepathic messages include Z Orb collection, collecting minerals from Mineral Deposits or the environment, collecting fruit, hunting wolves, hunting deer, and catching fish. At times his messages may even feature his habit for making bad puns and jokes usually related to the activity in question. Receiving 20 telepathic messages rewards the Who Needs a Phone? Achievement/Trophy (depending on their gaming system).

He also contacts them the first time a Super Villainous enemy appears after all Villainous Enemies in an area are defeated. He notes their power is unworldly and that they are dangerous. His fears are well founded as the Super Villainous enemies are under the influence of the Demon Scientist Towa as part of her plan to acquire enough energy to create a body for Mira's core. Like in Xenoverse, Mira's core uses telepathy to tell his enemies to be patient as he plans to show them ultimate power once his body is completed.

Slug about to read Bulma's mind 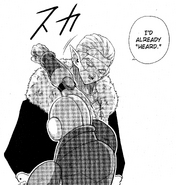