Chief of the Sea Police

Katayude has a sleek effeminate appearance, he wears government suit and wears glasses. He has slicked back hair. In the ten year reunion he is seen wearing a white lab coat.

Main article: Jaco the Galactic Patrolman Katayude first appears in the second chapter, as he and several government officials visit Omori. They come to tell Omori that he has a week to vacate the place as they want to turn the island into a resort facility for politicians. When leaving the island, using a telescope, the government inspector Katayude spots Jaco on the island. After talking with Omori about their visitors, an angry Jaco sinks their ship with a rock and forces them to use a life raft to return. Meanwhile, Katayude is later seen again at his home. As he is watching TV, Katayude sees Jaco on the news, remembering he saw him on Omori's island. Tights leaves the island to be on the rocket and, a short time later, Katayude arrives with four soldiers to get Jaco. Jaco defeats the soldiers, and he and Omori use his spaceship to rescue Tights and the pilot from the crashing rocket. After kicking the rocket away from the city it was about to crash on, Jaco destroys the rocket with his Ray Gun. As they witnessed the whole scene, Katayude and the soldiers decide to let Jaco and Omori live in peace and leave the island. In addition promises to fulfill Jaco's request to change the picture used for Jaco's wanted poster which is shown to be drawn even cruder.

Ten years after parting ways, Omori, Jaco, Tights and Katayude reunite on the former's island for a temporary reunion. 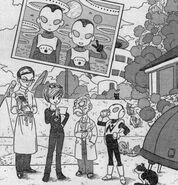 Tamagoro during the reunion on Omori's Island